Earlier, in Part 1 of this series, we discussed an overview of the 120-volt AC system and how electricity comes in from the shoreline source and supplies the appliances. In this article we will talk about what individual appliances require for electrical power, and how to manage your system to prevent overloading the source.

Most campground sources or shoreline power will have two or three outlets available for power. Smaller campgrounds typically only have 15-amp and 30-amp power which will limit the number of appliances you can run, and are usually not a good option for the bigger 5th wheel trailers or large motorhomes. To run both roof air conditioners and other appliances, these rigs require 50-amp power which supplies two “legs” of 120-volt power. 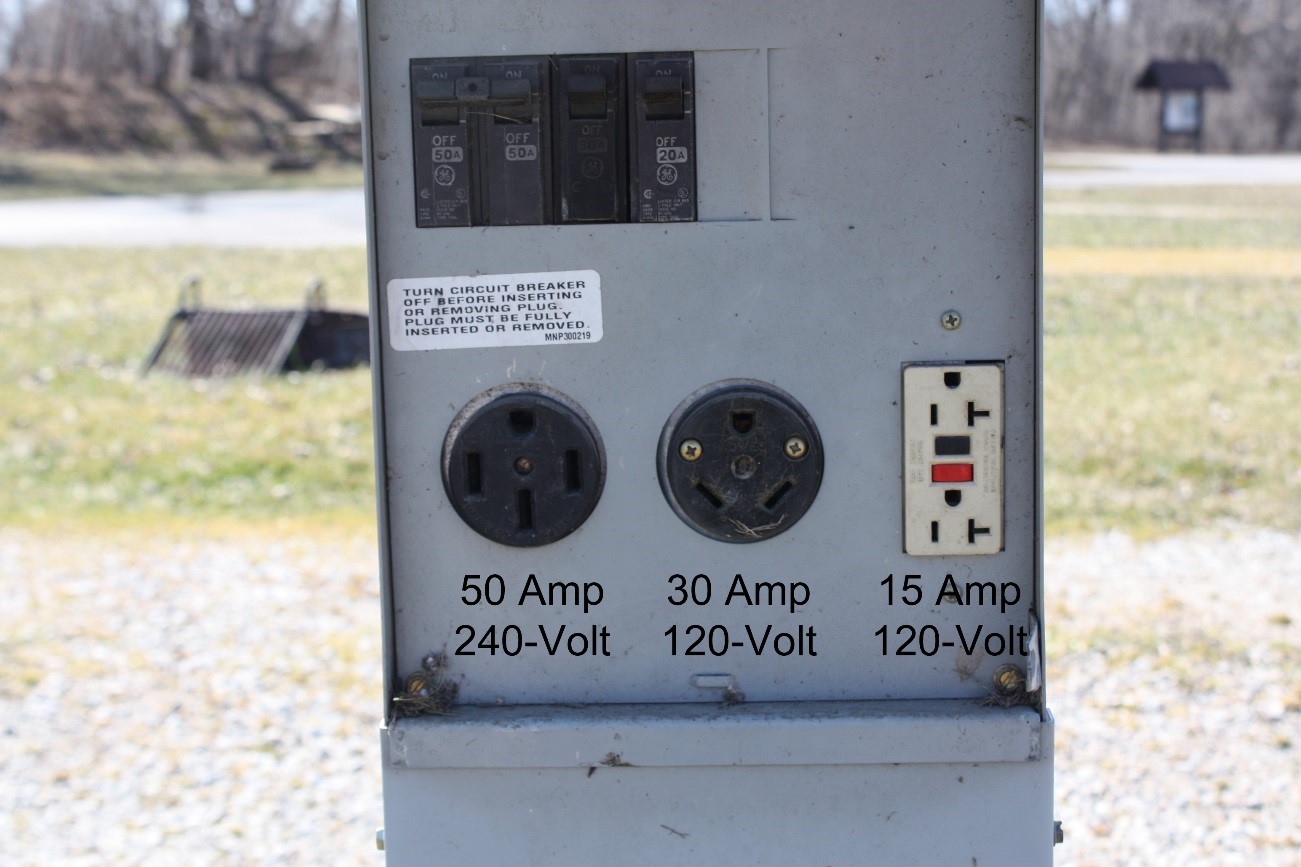 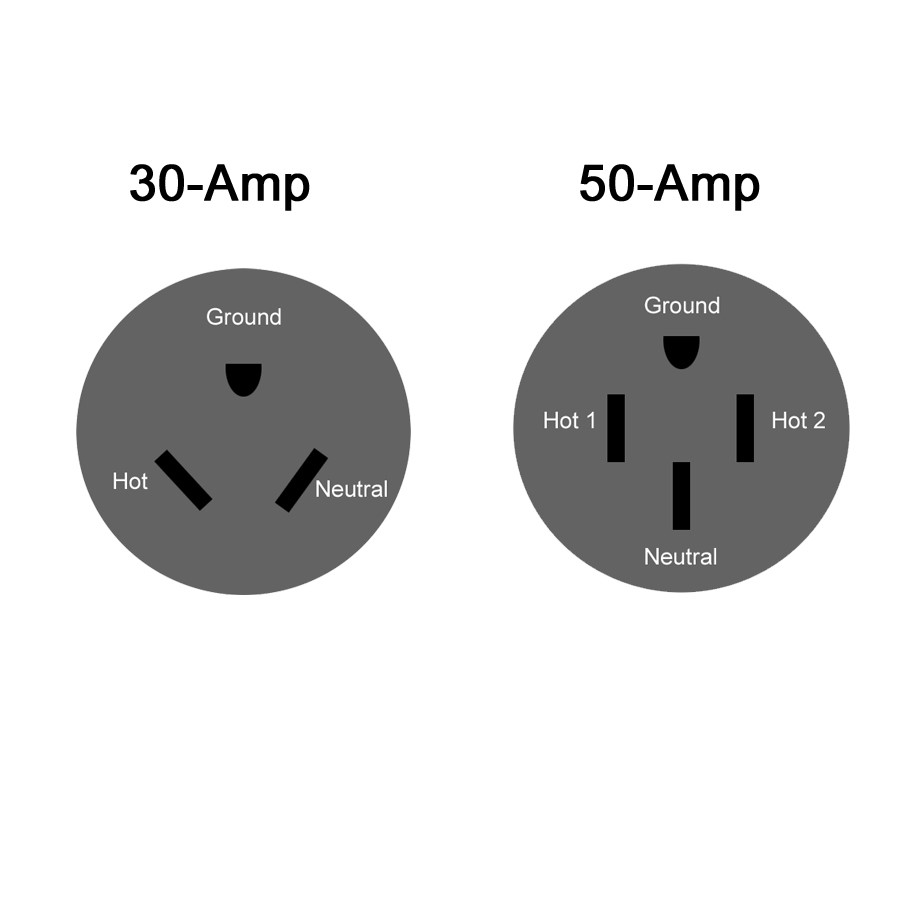 Proper energy management starts with an understanding of what power your appliances will draw in your rig. Most 120-volt appliances will have a data plate that has the model, serial number, and amp draw at maximum capacity. Maximum capacity means the amp draw when that appliance is working at the highest load. For example, an air conditioner that might only draw 8-10 amps during fairly cool temperatures but will draw a maximum of 14 amps when it is really hot.

Make a list of all the appliances in your coach that operate on 120-volt power and use the chart below to see what applies to your rig: 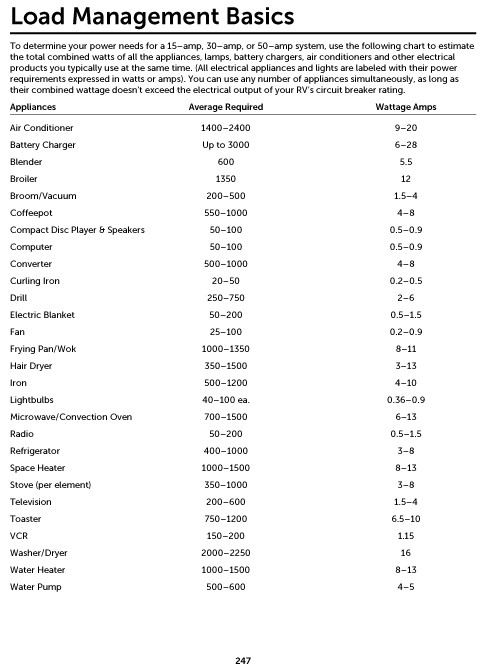 Notice there is quite a range in the amp draw for some of the appliances, such as a microwave that can be anywhere from 6-13 amp. It’s important to identify your specific model and calculate the draw. However, there is an easier way which we will cover later.

Let’s look at a typical RV plugged into a 30-amp shoreline plug. The power comes into the distribution center with a main circuit breaker and has individual breakers for appliances such as the refrigerator, air conditioners, and others. If you are running one air conditioner it could draw 8 amps at moderate temperatures and up to 14 amps during high load. Units built before 1990 might have air conditioners that could draw up to 18 amps!

Let’s say your refrigerator running on 120-volt power is drawing 6 amps, so in theory this rig is only drawing 14-20 amps during normal operation. But now we need to factor in the temporary usage appliances and the battery converter or charger! Interior lights, roof vent fans, LP appliances and other system running on 12-volt power draw from the house batteries and the converter or battery charger will kick on to recharge the batteries as they draw down to a certain voltage. This can draw anywhere from 4-9 amps without any warning! Most RVers understand that using a microwave oven, toaster, or other 120-volt appliances will create a spike in the amp draw and plan for it. However, you need to be aware of these items that will create a “peak” in amp draw such as the converter.

Now it is time to find the actual amp draw of your appliances. Keep in mind, anything that creates heat with a glowing coil or metal such as hair dryers, curling irons, or hot plates draw a lot of amps. You need to know what that appliance draws so when you use it temporarily, you might need to shut something else off, like the roof air conditioner. I use a meter called Kill A Watt which plugs into any 120-volt outlet and then plug the appliance in to find the amps or watts it draws. You can find these on Amazon or at any home improvement store in the electrical department. 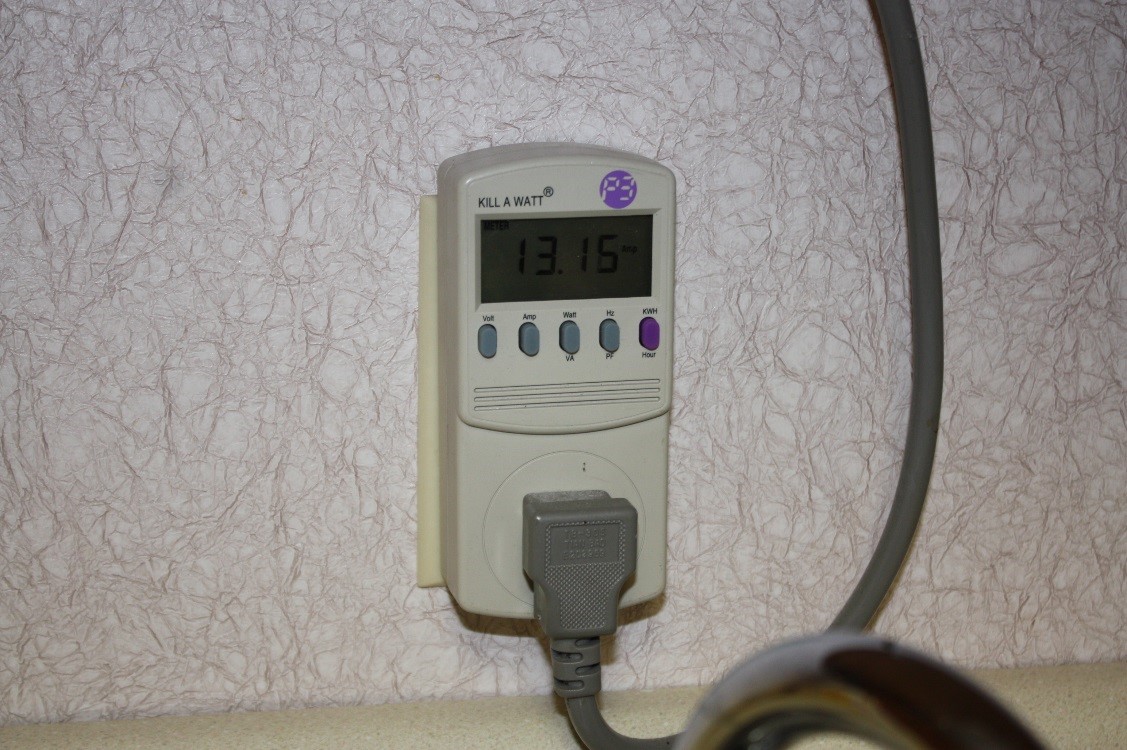 Plug in all appliances that will be used even temporarily to calculate the amp draw. Don’t forget about the chargers for cell phones, laptops, and CPAP machines at night! Once you get all the data collected, you will need to physically manage the energy draw by shutting off items like the roof air conditioners, refrigerator, or electric water heater while temporary appliances are being used.

There is another option though, an energy management system (EMS) such as the Intellitec model which is used by several manufactures in larger units. This system has appliances such as the roof air units, refrigerator, and electronic water heater connected to a smart computer that will automatically shut off these appliances temporarily as the amp draw gets over the limit. In the case of the air conditioner, it shuts down the compressor, but the fan will still run to provide air flow, then the compressor if needed. For the refrigerator, it will shut down the 120-volt operation which means it switches over to propane. All this is usually is for about 2-3 minutes as the microwave or other appliance is drawing a higher load so food will not spoil and the interior temperature will not get uncomfortable.

Here is an example of the Winnebago version called Powerline which tells you the AC amp load and sheds appliances.

An easier option is the Surge Protector by Surge Guard which is a protection from a spike in voltage from the campground source and will shut down if the power from the source goes down below 110-volts. This protects motors and condensers in appliances but also shows the amps your rig is using at a quick glance. You can get this portable version, or a more secure option can be permanently mounted in your service compartment.

Whatever method you use, it’s important to understand the load your appliances and equipment will draw and manage it according to the power available.