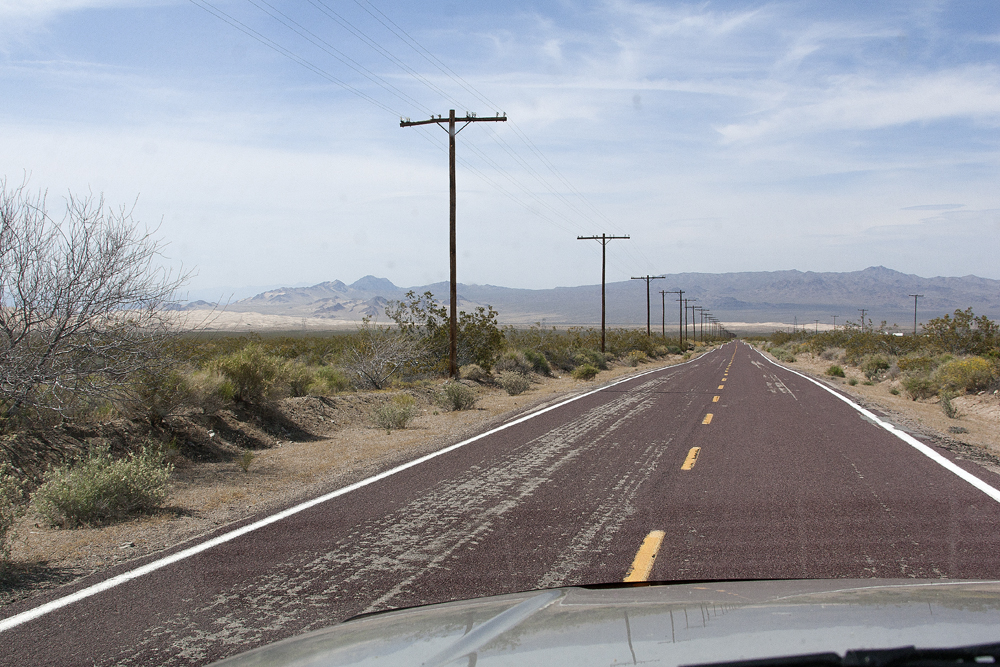 Picture this: out of the window of an airplane you see the nighttime vastness of the Nevada desert with little sparkles of light sprinkled around. Suddenly, out of the darkness appears a firestorm of brightness, intense whiteness, lasers and neon. It’s the sprawl of Las Vegas glaring up from the abyss.

A less dramatic but a still memorable approach to Vegas is in a highway-based vehicle, like your R.V., churning smooth miles along I-15 from L.A. or Salt Lake City. But while I-15 is practically a necessity in reaching Las Vegas from the south, there is a road less travelled from the south. Through the archetypal desert landscapes of the Mojave National Preserve that meets and joins the 15.

I-215, which merges with I-15 outside of the Los Angeles basin, is not far from our home on a mountain in the “Inland Empire” (as the area east of L.A. is known). It has most recently gained worldwide recognition as the setting of the Coachella Valley Music and Arts Festival each April.

I-15 is the mainstream northbound route to Vegas, but on a few occasions we have opted to detour on “a road with no name,” which plies its way on a never-ending 2-lane road bordered by sand, scrub brush and mostly abandoned buildings.

For most of my first four-and-a-half decades of living in, or near my hometown of New Orleans, I didn’t have any concept of the grandeur of the Golden West. Therefore, I didn’t particularly care about what new vistas it held. I traveled extensively around the Eastern U.S. by car, but when I had business on the West Coast, it was by air.

To Easterners I’d like to opine that if you don’t point your RV westward at least once, you’re missing out on America at its grandest. The High Sierra, the Rockies and numerous other ranges incite awe in travelers. The majority of national parks are in the West, each with a splendor that makes the visit memorable. The variety of terrains is astounding. 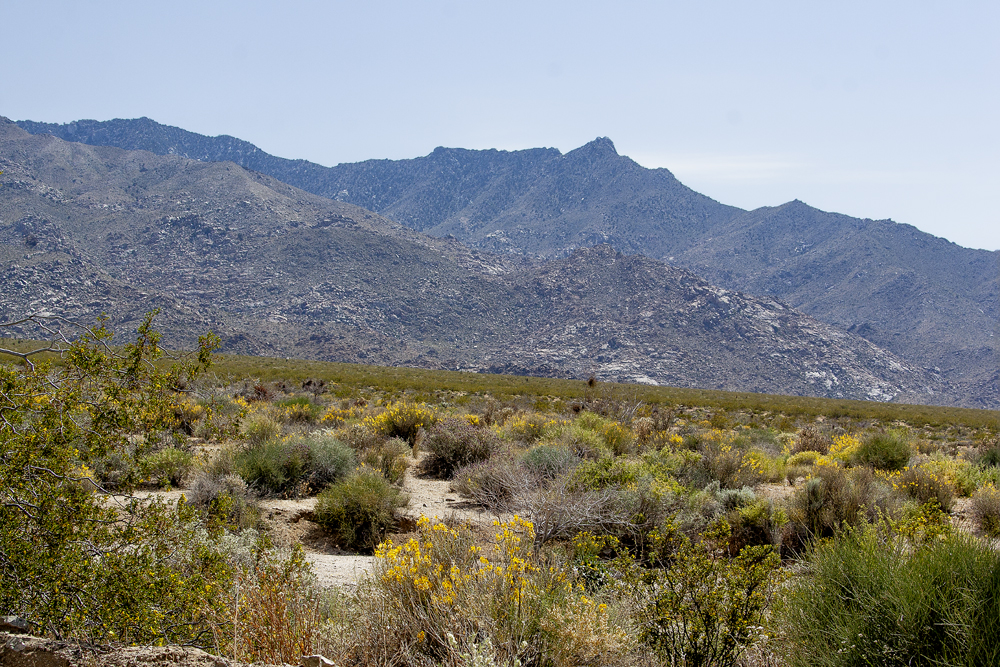 Kelbaker Road plies its asphalt through the Mojave [Mo-ha-vy] National Preserve. While a jackrabbit may dart among the cactus along the road, you’ll be lucky to see bighorn sheep or a coyote. Unless you’re into vegetation and geology, there’s not much excitement as you speed across the desert floor.

Many western roads lay in straight lines through miles of flatlands and desert with jagged mountain peaks and ridges disrupting the horizon, desolate patches of land and desert vegetation. Isolated, but rarely boring.

Your GPS system may offer more than just the interstate routes to Las Vegas, but my advice is, if you want to experience this out-of-the-way byway, enter “AMBOY” as the destination, and then “KELSO,” both desert outposts along the roads.

And for snowbirds leaving campgrounds in far south Arizona or California, among connecting highways are California 86 and 111, which border the curious Salton Sea east and west. From the northern junction of the two roads, take the main route through Joshua Tree National Park to Twenty-Nine Palms. 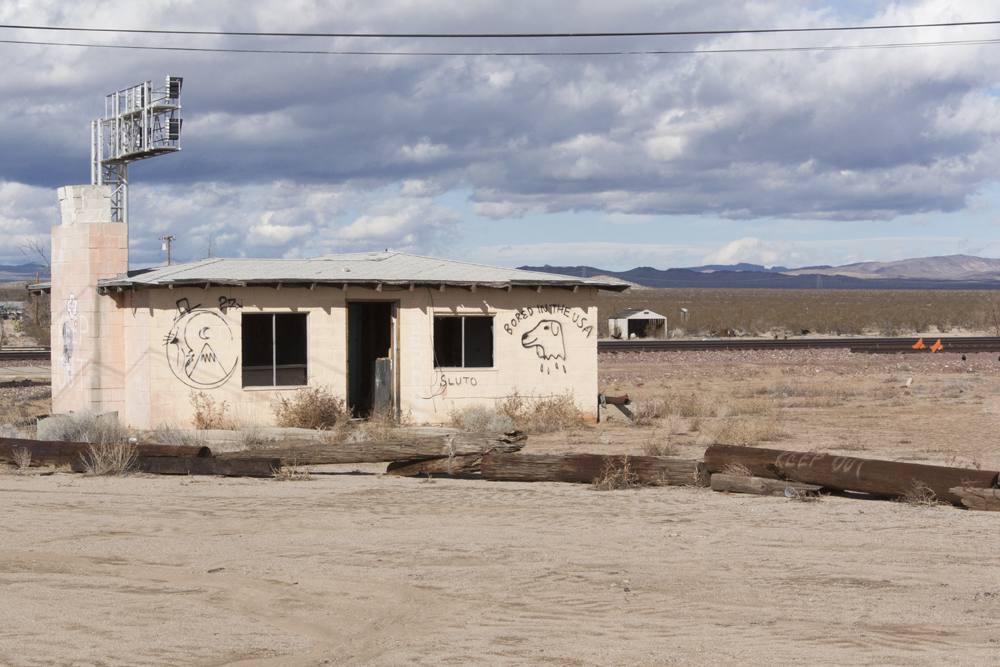 Abandoned buildings are typical in vast expanses of desert. To us, they are distractions that signify either someone’s brave idea that they will make a go of it capturing the curiosity of tourists or hiding from civilization in the remotest parts of the lower 48.

Not being in a rush and hungry for adventures, this road-less-traveled made the journey more important than the destination for us. And even though we’re always amazed, no, make that “stunned” at the new casinos and changes to this city, the thrill of this trip was behind us when we drove from sand and barrenness into glitz.

Briefly, our course on the Amboy road turned onto a desolate stretch of Historic Route 66 for a few miles until we turned onto remote Kelbaker Road. We entered the Mojave National Preserve, where we saw a flashing yellow light advising us of tortoise crossings. For the entire expanse we went for miles before seeing another RV (or tortoise), except at the Kelso Depot, a fancy train station in the middle of nowhere. There we saw two dozen tourists getting what was probably an interesting guided history lesson about the gold and other precious mineral mining days in the Mojave’s past. 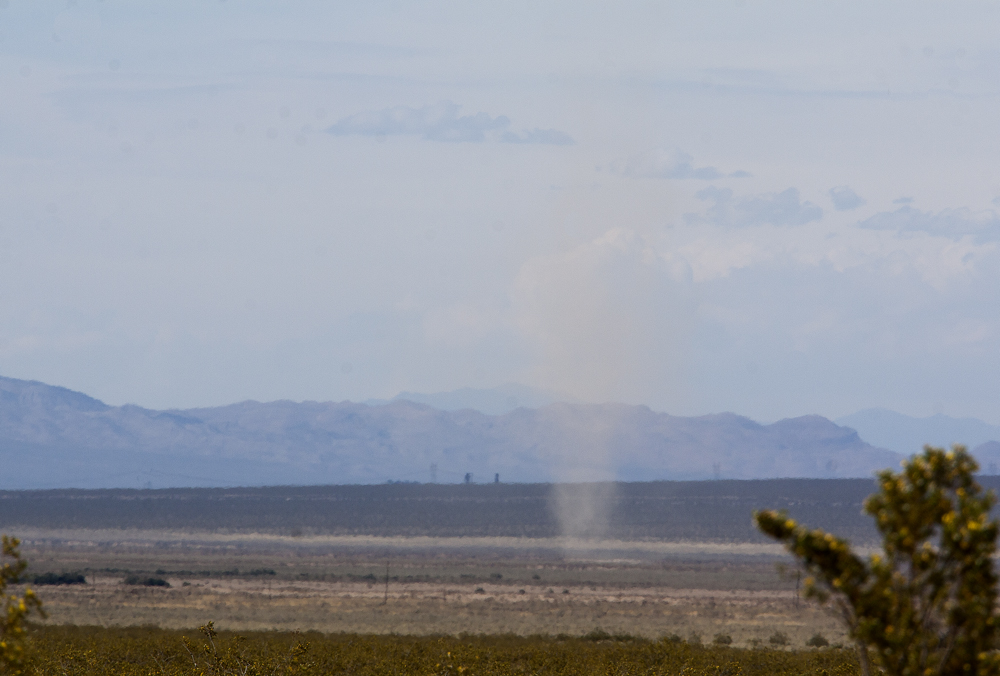 Desert winds stir up dust devils that scoot across the desolate landscape. They are harmless, but make sure your windows are closed.

The good news for diesel-pusher drivers is that the roads are big-rig friendly; matter-of-fact, it seems to be a favorite path for 18-wheelers. For everyone, make sure to fill up with fuel before embarking on the journey. There is one gas station still functioning, but you pay for the availability in a remote area.

One caution: a detour sign arose on our path on Kelbaker with no clear indication of what to do next. Common sense prevailed. We took a narrow road on the left, which quickly became a normal paved street with traffic on the interstate in view ahead.

It’s all part of the adventure, which is to be expected on roads-less-traveled, and for us, adventure is what keeps us looking forward to the next trip.

4 Responses to “The Never-Bored RVers’ Journal: A Down & Out Way to Las Vegas”