Is it just me, or do kids these days not seem to have as much of an interest in the fun games and creative outdoor activities that we had during my youth? With so many distractions like smartphones, tablets, video games, and the internet, it’s no wonder the great outdoors don’t seem to hold as much of an appeal anymore. My granddaughters had never even heard of my old favorite games such as Kick the Can and Annie Annie I over!

So, for several years now I have been taking my granddaughters camping and introducing them to some of these fun outdoor games. It’s been a great opportunity to get them playing outside and enjoying the great outdoors, plus their granddad sure does love the quality time with them. Outdoor games and activities are also a great cure for the inevitable “I’m boreds!” that you sometimes hear when camping with kids.

In this post, I’m going to tell you about a couple of outside games you can play with the kids while camping that don’t require any prep-time or things to buy – just some brain power, a little bit of skill, and energy!

Dave and his granddaughters, Grace and Maddy.

Annie Annie I Over

This game has been called many names including Annie Over and Andy Over, and as grandmother claimed to have played it as a kid that means it dates back many years! You only need two items to play this game: a ball and a building or RV low enough to throw the ball over and run around.

Start by choosing team members for two teams, one on each side of the RV. Team 1 starts by yelling “Annie Annie I Over” and then throwing the ball over the RV. The team on the other side tries to catch the ball. If the ball does not make it over and comes back, the throwing team yells “Pigtail” which I assume from looking at a pig’s tail means it curled back to the original start point!

The ball is thrown again with the appropriate “announcement” until it makes it to the other side. Team 2 then tries to catch the ball, not knowing where it will come from. If someone catches the ball, that team runs around the RV and tries to throw and hit a player on the other team before they run around the RV back to their original side. If hit, that player becomes part of that team. If the ball falls to the ground, Team 2 then starts the process over yelling “Annie Annie I Over” which tells Team 1 they did not catch the ball and therefore do not need to run.

The fun of this game is in the chase and the deception! Teams can split up and run different directions, and the team that caught the ball can give it to anyone creating a decoy or giving it to the fastest player. The game ends when that lone player is finally captured. This game attracts kids from all over the campground, so if you don’t want a dozen children running around your RV and yelling Annie, you might want to stage this event at the picnic shelter or another building in the campground.

I’m not sure where this classic game originated, but a quick search on Wikipedia tells that this was a popular game during the depression. The only piece of equipment needed is a metal can that will make noise when kicked. Growing up we played this almost every night in the summer and the first time I tried to introduce it to my granddaughters I was amazed at how hard it was to find a metal coffee can! When I was young, they were all over the place; now everything is plastic and they make no sound when kicked. This is an important part of the game! I found that 1 gallon paint cans are still available in metal. 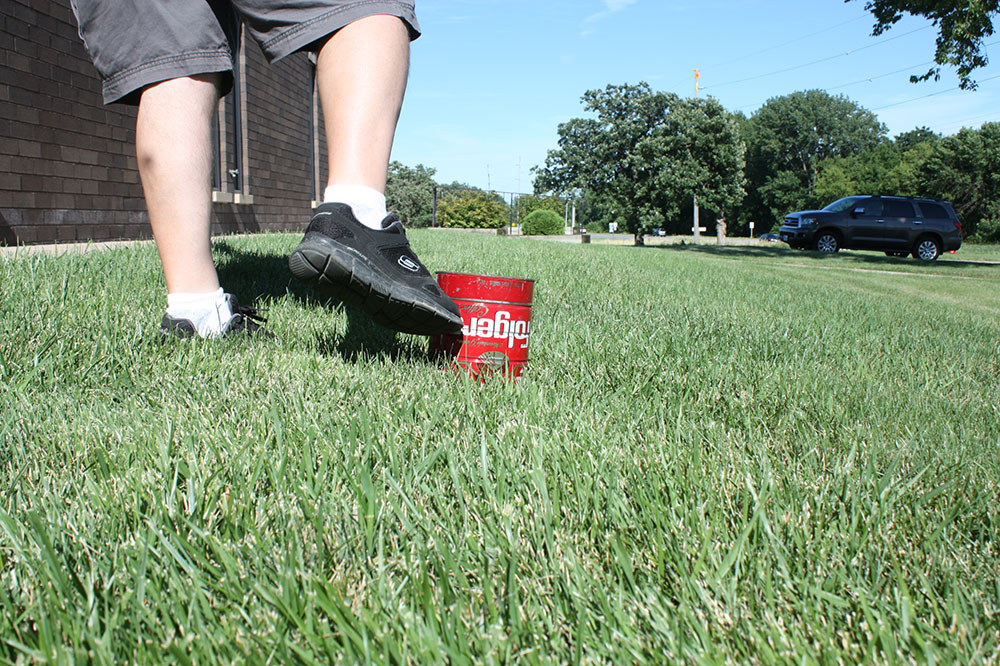 Try to find a metal can for Kick the Can.

This game is a form of the classic “tag” game as one person is “it” and counts to 100 while the others hide. The can is placed in an open area and the “it” person seeks to find the other players. If the “it” player sees another player, they run back to the can, jump over it, and claim “Over the can on (name)” and the location. That person is now captured and held in the open area. However, if the “it” person sees a player and that player gets back to the can before the “it” player, they can kick the can and run away and hide again!

Also, once the can is kicked by a player, any captured players are set free and can run and hide. The “it” player must grab the can, set it on the base and jump over it 3 times before looking for other players to recapture. This can also be played with teams which means there are more than one “it” players, making it more challenging. The fun is in the strategies of hiding, moving to new locations, and running in to kick the can and set your friends “free”! We would set boundaries for how far away you could hide and a time limit for hiding. If nobody was caught for 10 minutes, the “it” player would start to count again, usually watching to see where everyone was going.

The game ends when all players are captured, or when the “it” player gets too frustrated! Or in my case as a kid, when it got dark and the front porch light came on. We would usually be having so much fun that the porch light would start blinking half an hour later which was mom’s way of saying, “I mean now!!”

Next time you’re out camping with your kids or grandkids, give these games or similar ones a try. They’ll appreciate the fun, organized activity in the fresh air and you’ll appreciate seeing your kids running around enjoying the great outdoors.

This was a fun stroll down memory lane, so now I want to hear from you. Do you have any favorite games from your childhood? Any other ideas for kids’ campground activities? Let us know in the comments.

7 Responses to “Fun Games and Campground Activities for Kids”