Much has been written about the Grand Canyon – most of it far more eloquently than I could ever dream of putting into words. It’s awesome. It’s breathtaking. It’s inspiring. And it’s truly overwhelming. The Canyon just draws you in – every time you look into its mile-long depth colors and shadows change, or you notice something you never saw before. 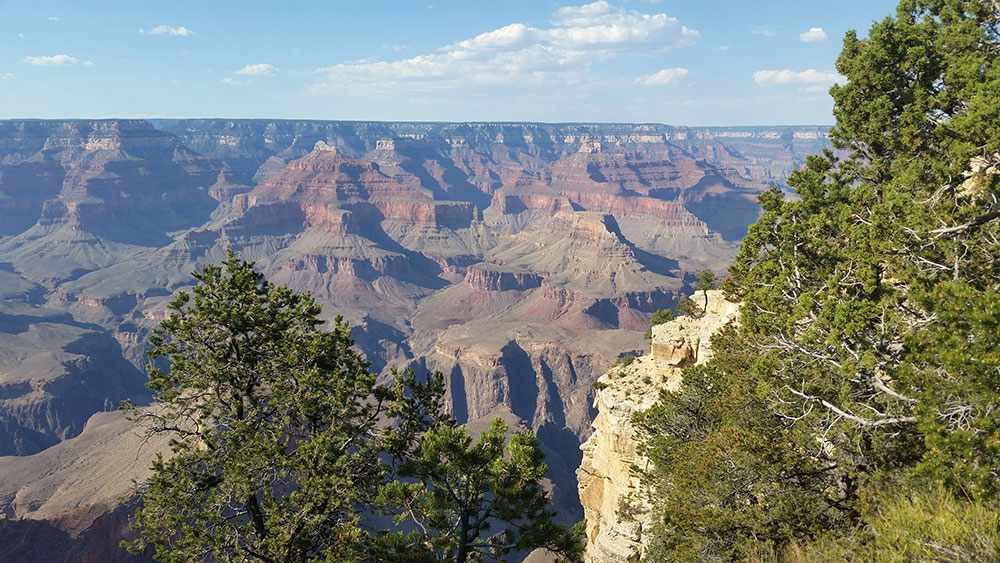 If you’re into geology, the Canyon reveals a beautiful sequence of rock layers that serve as windows into time. At the bottom, rocks are nearly two billion (that’s with a “B”!) years old. Because the Canyon sits in an elevated plateau, its walls expose the various geological layers for all to see.

A Brief History of the Grand Canyon

The Grand Canyon area has a long and colorful history. Ancient tribes peacefully inhabited the canyon early on, leaving behind remains of ancient pottery, stone weapons, and even buildings inside the canyon walls. Unfortunately, different tribes arrived, chasing the original people out. Native Americans eventually introduced this amazing chasm to white settlers arriving in the southwest, opening the area to entrepreneurs who were interested in economic ventures such as mining, lumber, and ranching. However, transportation difficulties, the native peoples’ resistance, and the absence of a local labor pool hindered these efforts, so that only a few pioneers were able to eke out a subsistence lifestyle. 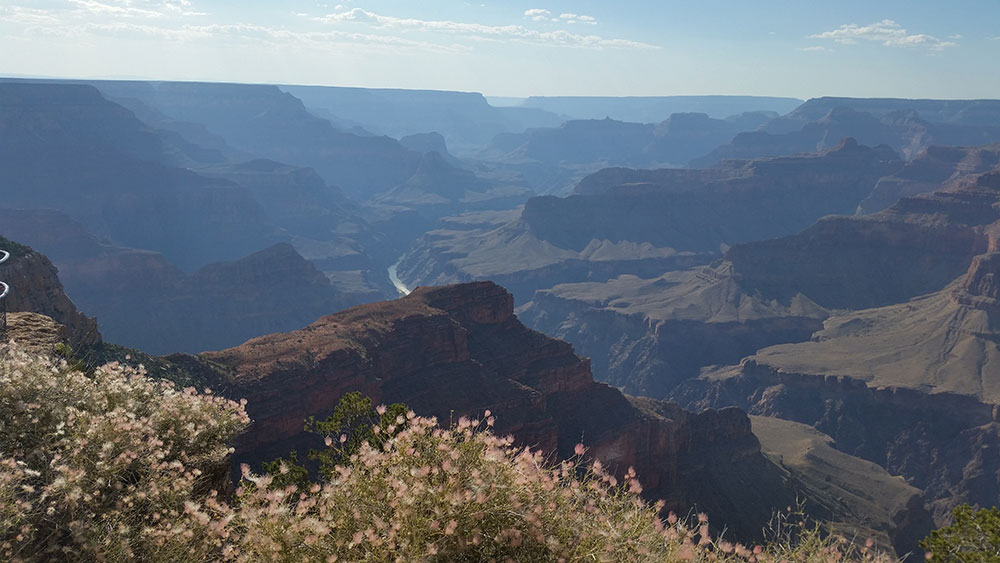 With the introduction of the railroad to Arizona, tourists began to visit the Grand Canyon, disembarking from trains in Flagstaff and renting buggies for what could be up to a two day ride to the Canyon. In 1901, a rail spur was opened that brought tourists right to the head of the Canyon’s Bright Angel Trail – a three hour rail trip costing only $4. The tourist industry began to prosper – hotels, lodges, shops, and restaurants began to open up along the Canyon’s south rim, and today form the area known as Grand Canyon Village.

In the late 1800s, there was a limited amount of interest by the Federal government in protecting and conserving the lands in the southwest. Although several bills to set the Canyon aside as a public park were introduced, they all died in Congress. President Theodore Roosevelt visited the Canyon in 1903, announcing that it should remain “pristine for future generations”, but then made it into a game preserve. In 1909, he designated the Canyon as a National Monument, assigning its management to the Forest Service. Tourism was not a priority for the Forest Service at that time – they focused on ranching, mining, timber production, and fire suppression on public lands – and their rangers had little incentive to manage Canyon visitors. Instead, they relied on private concessionaires and corporations like Fred Harvey and the Santa Fe Railroad to develop and manage tourism to the area. 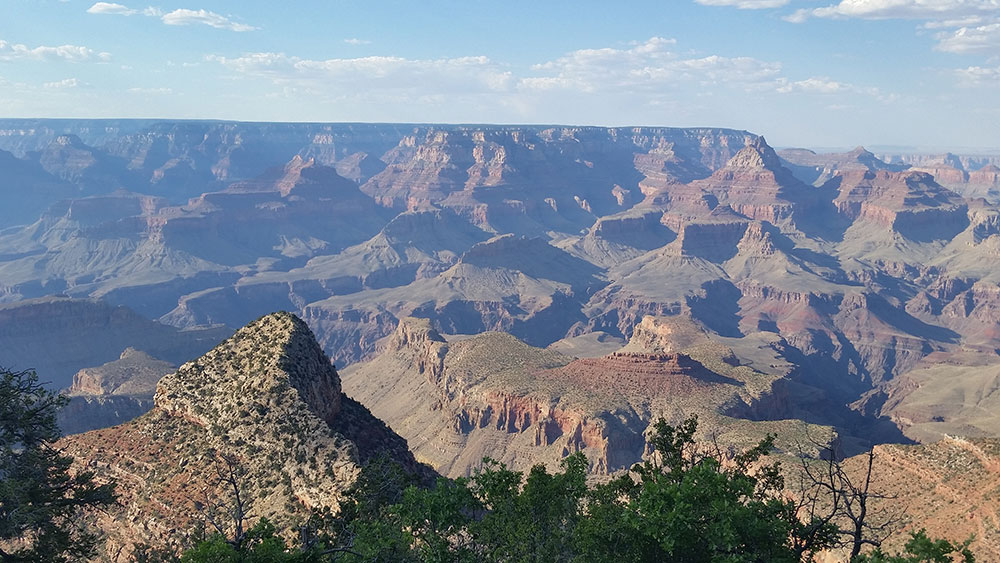 By 1910, motorists were arriving unannounced at the Canyon, and the hotels were unable to adequately accommodate them. As there were no designated campgrounds, visitors were setting up tent sites and sleeping in their Model Ts scattered around the south rim. Meanwhile back in Washington, D.C., the National Park Service was created in August of 1916. Due to the conflicts the Forest Service was experiencing with private corporations and individuals, Grand Canyon National Park was not created until 1919, when it became America’s seventeenth National Park.

Today, five million visitors enter the park each year. There are two unconnected areas of the Park – the more developed south rim, and the less traveled north rim. It’s about a 200 mile journey to get from one to the other, (due to that giant hole in the middle!) and drivers must leave the Park boundaries to get back and forth. 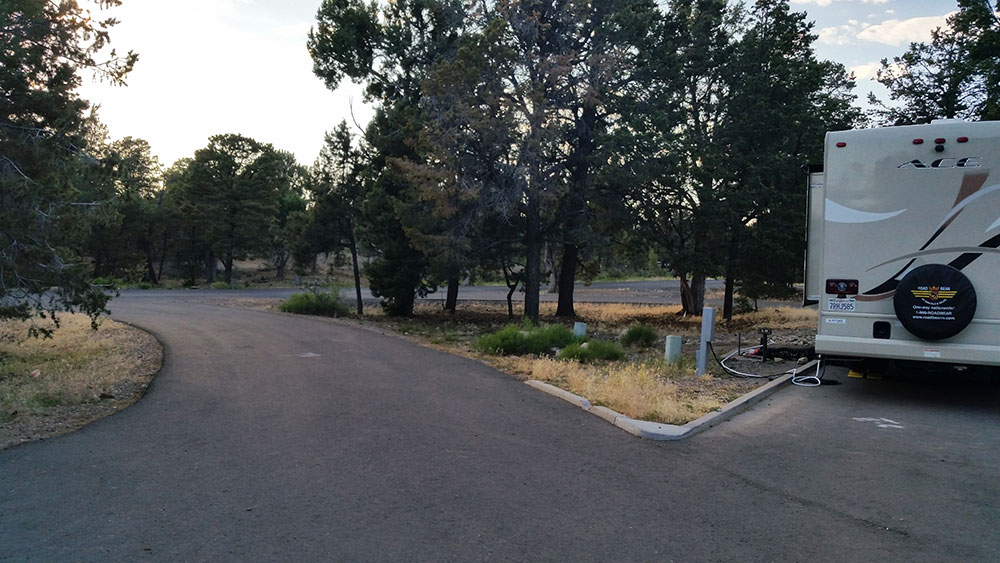 Our visit was one of several we’ve made to the south rim, and it was one of the most enjoyable. Camping at the south rim is permitted only in one of the three designated campgrounds. Desert View Campground is only open in the summer months, does not accept reservations, and has no hookups, but can accommodate RVs up to 30 feet. Camping is on a first-come availability, and usually fills up by 1pm each day. Mather Campground is located in the village, accepts reservations, but has no hookups and can only accommodate RVs up to 30 feet. We chose to stay in Trailer Village, which is a full service RV park with full hookups right in the village. Sites vary but most are up to 50 feet in length and are reasonably spaced apart. There are very clean restrooms and the park’s free shuttle buses stop right at the campground’s entrance.

We experienced a problem with our RV’s water connection while we were at the park and one morning a very friendly elk stopped by to help herself to the leakage, drinking from the faucet as if it were a water fountain. There were a number of elk wandering through the campground, particularly during the morning hours. 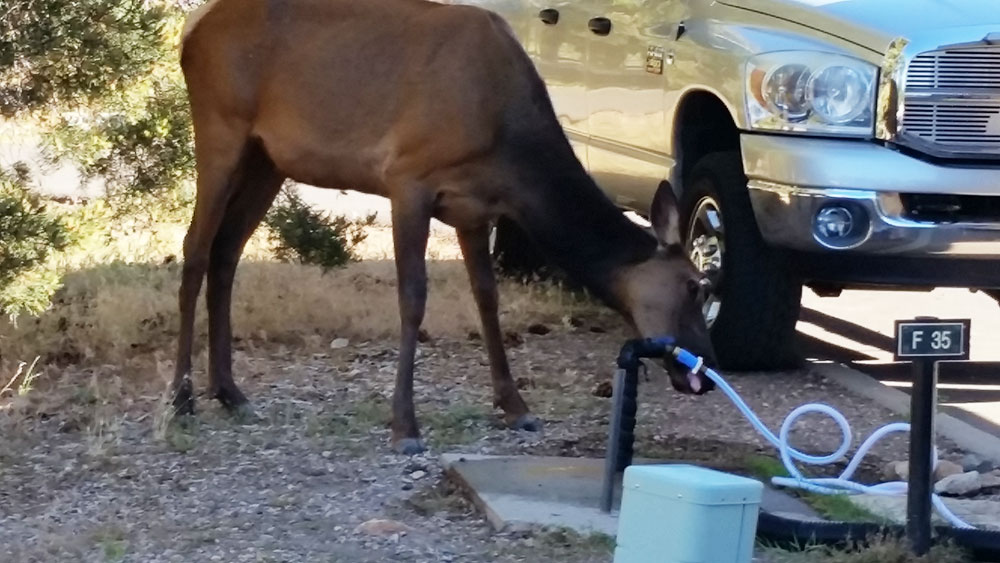 There are some private campgrounds in and near Tusayan, at the south rim gate to the Canyon, and more in Williams, Arizona, about a 50 mile drive from the Park entrance. Tusayan also offers an IMAX Theatre, with an interesting 34-minute film on the origins of the Grand Canyon (and some breathtaking river rafting scenes) produced by National Geographic.

Like other National Parks, dogs must be on leashes at all times, and are restricted from walking on the trails going into the Canyon. However, they can walk along the rim trails and visit the lookout points. We spent one afternoon driving with Harley to Desert View, a 25-mile scenic drive heading east along the south rim, culminating with a stop at the newly re-opened Desert View Watchtower, with an observation deck for a 360 degree view of the Canyon and surrounding lands. The Watchtower was built in 1932, and is one of several buildings at Grand Canyon designed by Mary Colter, architect for the Santa Fe Railroad. 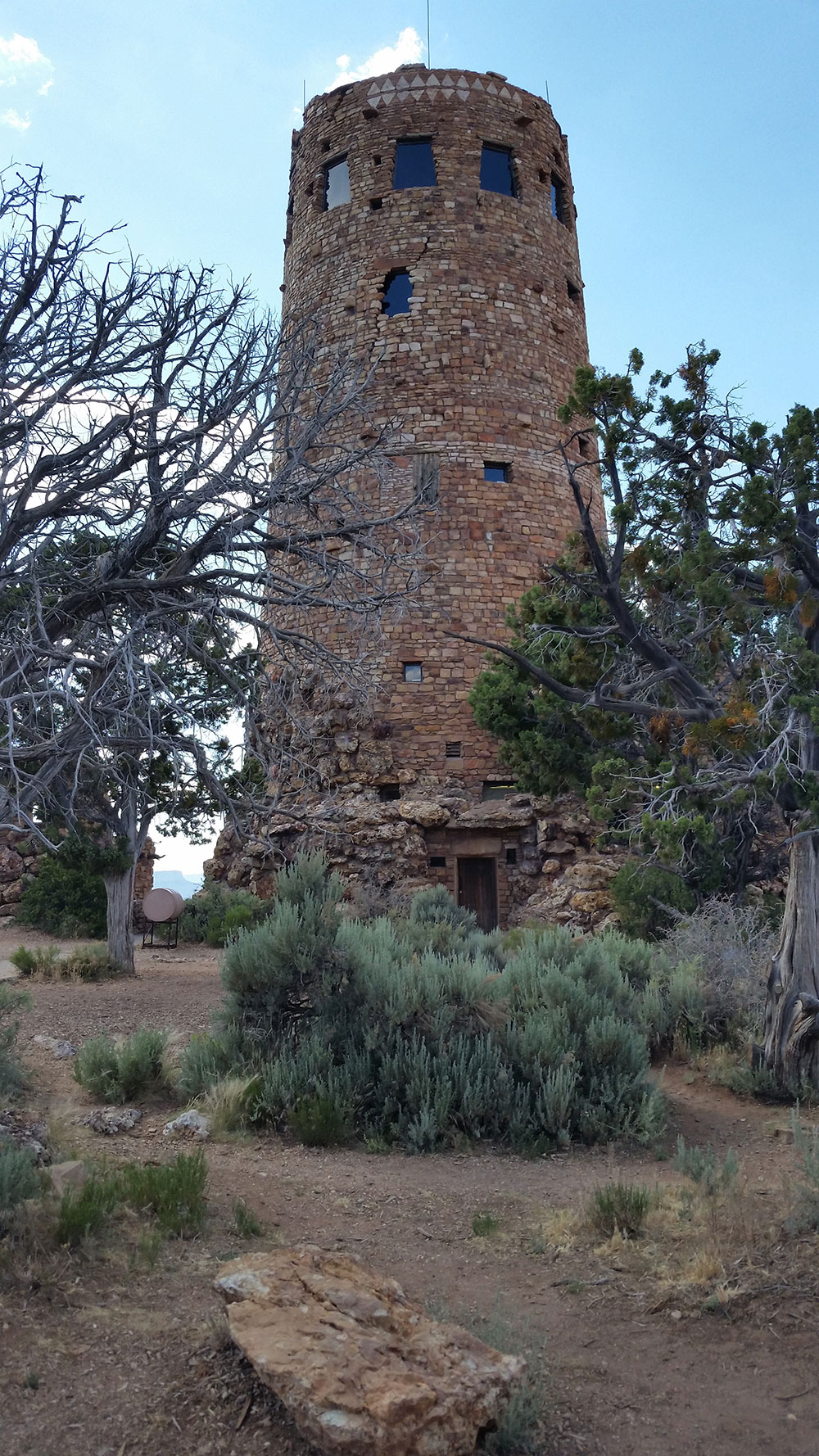 We took an early morning walk along the west end of the village, following the rim for seven miles to Hermits Rest. This route can be accessed by the free shuttle buses, by bicycle, or by foot, but private vehicles are not allowed to drive this route during summer months.

By staying in the park, we had time to also enjoy the many trails throughout the park, not necessarily right on the rim. While summer tourists crowd along the rim, these pathways and trails meandering through forested areas are peaceful and beautiful walks with very little traffic. 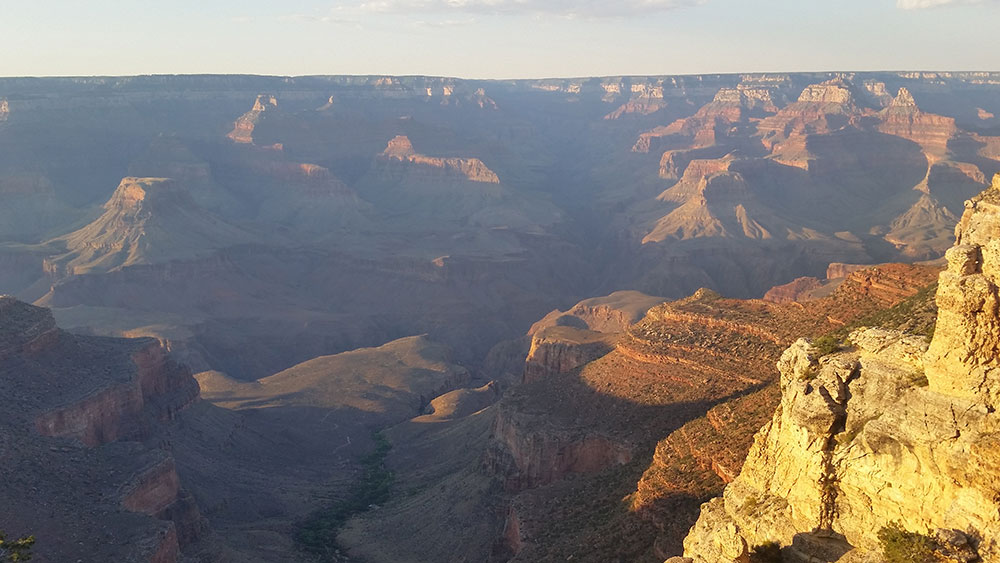 Tourists from all over the world flock to the Grand Canyon – one of the seven natural wonders of the world – and it’s right in our backyard! That America the Beautiful Pass works here – regular entrance fee is $30 per vehicle for seven days, and they also offer a Grand Canyon National Park annual pass for $60 for 12 months.

No matter what time of year, the Grand Canyon will always draw me back. Next stop, north rim!

13 Responses to “On the Road with Sue: Grand Canyon National Park’s South Rim”