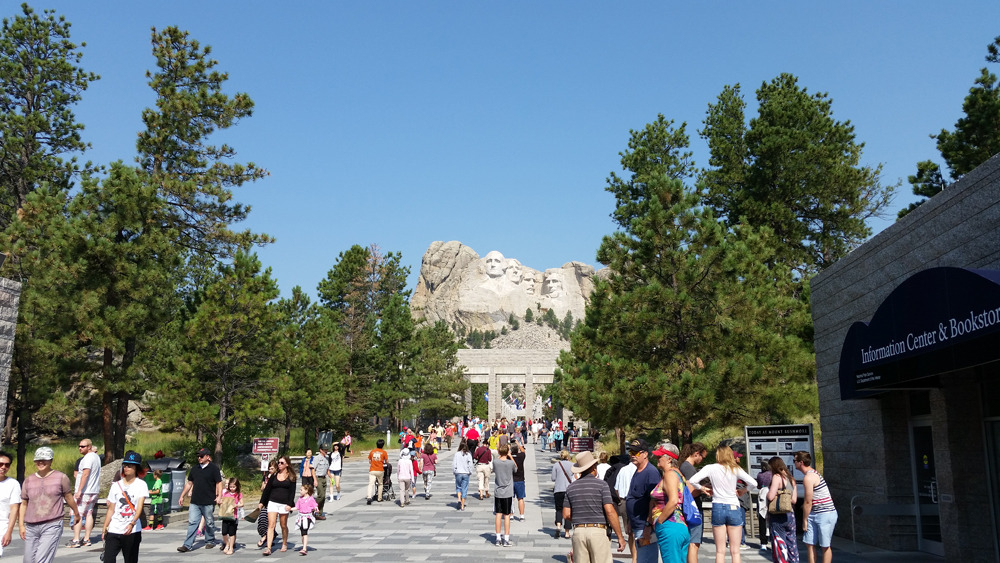 When we first started planning this RV odyssey, the first destination on my bucket list was Mount Rushmore. South Dakota was one of the few states I’d never visited, but most of all I wanted to see and experience this iconic landmark.

I’m not alone. According to the National Park Service, Mount Rushmore National Memorial is visited by nearly 3 million people each year. The faces of the four presidents – Washington, Lincoln, Jefferson, and Theodore Roosevelt – look down on a well-presented and designed visitors’ center, with an amphitheater offering movies throughout the day as well as multiple exhibits depicting the carving of the mountain. The walkway to the Grand View Terrace is decorated with flags of each of the 50 states. It’s all quite developed, but the facilities are equipped to handle the crowds of visitors. The Presidential Trail is a short walk (with many stairs) which runs just below the sculptures, taking you to the Sculptor’s Studio and the old Compressor House, which actually powered the lifts and machines during the carving process. 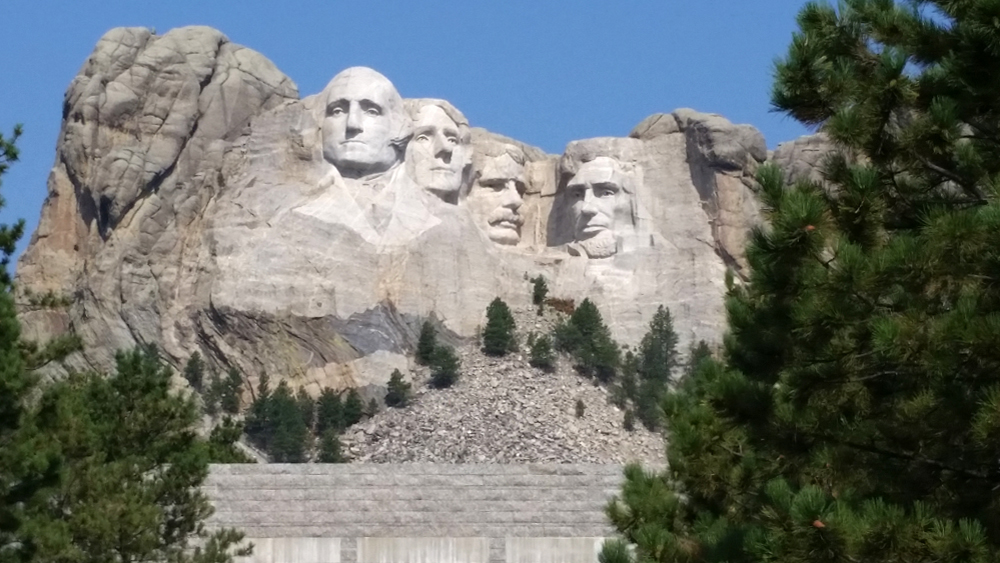 The idea of carving the presidents’ likenesses onto a rocky point in the middle of the Black Hills of South Dakota was originally presented in the 1920s by a group of elected officials who wanted to promote tourism to their state. After much effort, and a visit to the area by President Calvin Coolidge, they were able to obtain Federal funding for the project. At the same time, sculptor Gutzon Borglum had been carving likenesses of Robert E. Lee, Stonewall Jackson, and Jefferson Davis on horseback followed by a column of soldiers, on Georgia’s Stone Mountain. He visited the Black Hills in 1924, and began work on the project in 1925.

Gutzon Borglum died in 1941, but was already well into the project. His son Lincoln Borglum took over and finished Mount Rushmore that same year. There were more than 400 workers who had to endure conditions that varied from blazing hot to bitter cold and wind. Each day they climbed 700 stairs to the top of the mountain to punch-in on the time clock. Then 3/8-inch thick steel cables lowered them over the front of the 500-foot face of the mountain in a “bosun chair.” The work was exciting, but dangerous. 90% of the mountain was carved using dynamite. The powdermen would cut and set charges of dynamite of specific sizes to remove precise amounts of rock, and at those times all of the workers would have to be manually lifted off the mountain. Fortunately, not one fatality occurred during the 14 years it took to carve out the mountain. 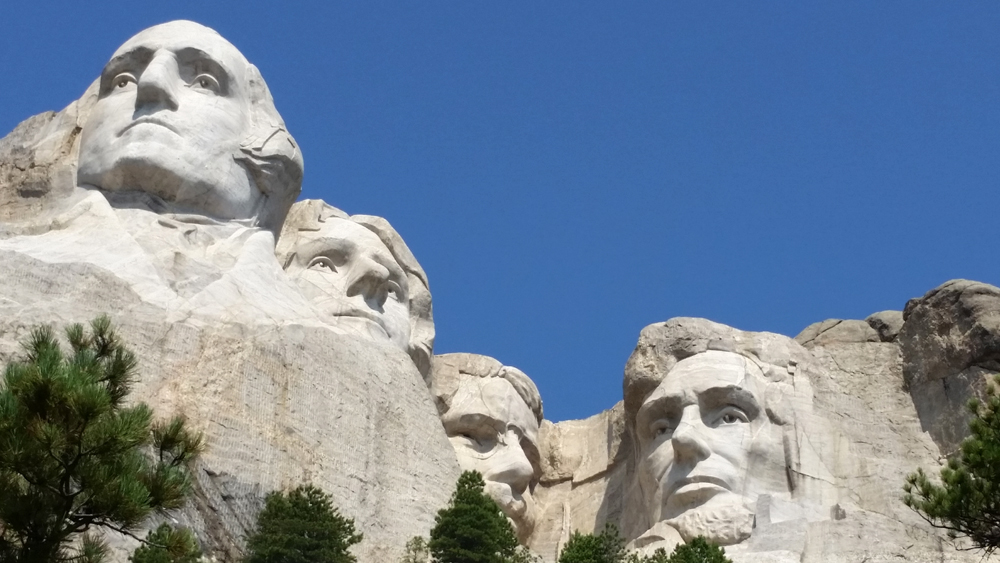 I’d often wondered why these four presidents were chosen to be memorialized at Mount Rushmore. At the Visitors’ Center, I found out. Naturally, George Washington was selected because he was the father of our country and laid the foundation of American democracy. Because of his importance, Washington is the most prominent figure on the mountain. Our third president, Thomas Jefferson, was the author of the Declaration of Independence and also negotiated the Louisiana Purchase, nearly doubling the size of the United States. Our 26th president, Theodore Roosevelt provided leadership when America experienced rapid economic and technical growth as it entered the 20th Century. And Abraham Lincoln held the nation together, preserving the union and abolishing slavery during the Civil War. I can imagine these choices must have been quite controversial back in the 1920s!

There is no entrance fee to Mount Rushmore, but they do charge $11 for parking. America the Beautiful passes are not accepted. Pets are not allowed in the visitors’ areas, but there are two designated pet exercise areas near the parking garages. There’s also no smoking allowed at the Memorial. During the summer, there’s an evening lighting ceremony at dusk, where the faces are illuminated.

Private RV parks thrive in this area, as well as the eight campgrounds in the surrounding Custer State Park. You will want to allow a good half day (minimum) for a visit to Mount Rushmore. We had left for a visit to the Crazy Horse Memorial and another five days in the Black Hills – more about that in the next installment!

Related Blog: On the Road with Sue: Black Hills, Badlands, Bikers, and More

10 Responses to “On the Road with Sue: Mount Rushmore”