The majestic landscape of Monument Valley, covering the northeastern corner of Arizona and southeastern corner of Utah, is something we’ve all probably seen in photographs, on television, and in the movies. The amazing sandstone bridges, arches, and towers, not to mention the clear blue skies and clean air, all contribute to become a photographer’s dream world. 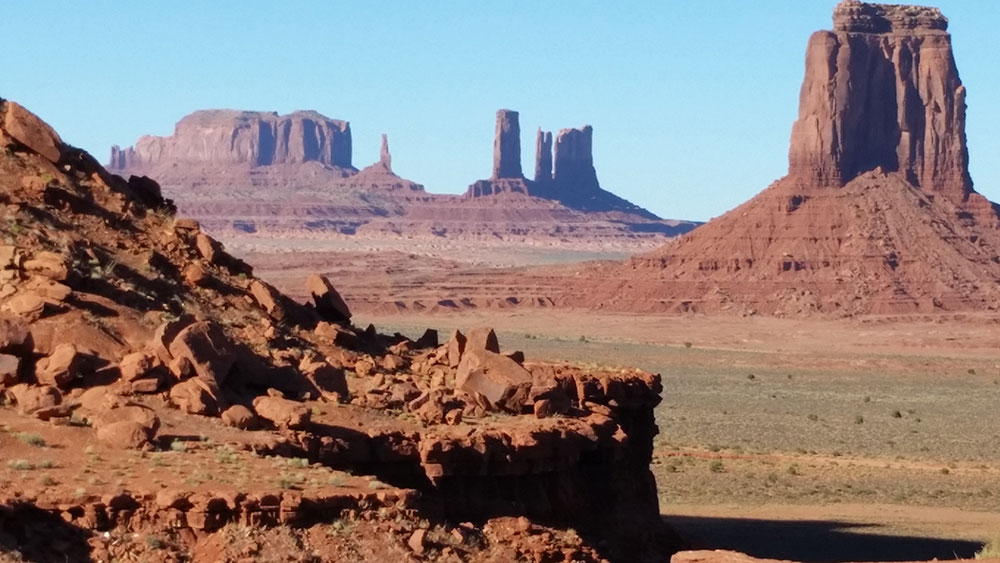 The movie industry made its way to the Valley from Hollywood starting in 1939, when John Ford filmed Stagecoach, starring a newcomer called John Wayne, and returning nine more times to shoot more Western movies. In later years, Monument Valley has appeared in many blockbusters, including 2001: A Space Odyssey, National Lampoon’s Vacation, Chronos, Back to the Future Part III, Forrest Gump, Mission Impossible II, and of course the climatic finale of Thelma and Louise.

As familiar as we may be with scenes of this amazing area from movies and television, visiting the Valley in person is an awesome and fulfilling experience. Like most Indian lands in the southwestern United States, it was given to the Navajo Indians because the white man didn’t want it. Today, it’s a gem, owned by the Navajo Nation and still inhabited by the Navajo people. It’s a land to behold, to watch and to value, and as we travel around every bend or over each hill, there’s a new and unique view to see. Each time we visit this magical area, I am so thankful that I am able to experience it. 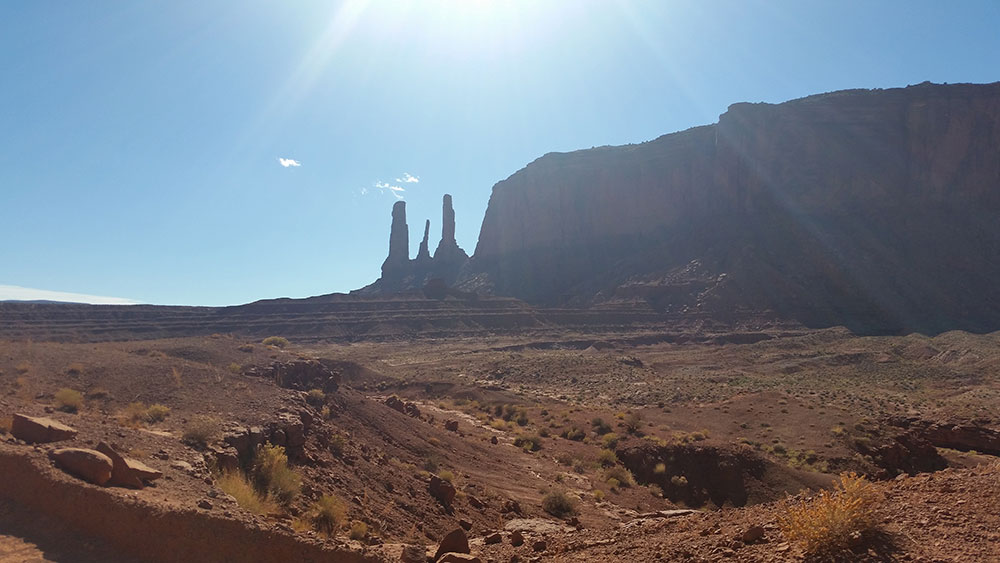 The Navajo tribe owns and operates this area as a tribal park. There is a visitor center with a gift shop, hotel, and restaurant, as well as informational displays about the park in their museum. They also offer a rather primitive campground with tent sites and small cabins overlooking the Valley right next to the center, and in the park.

It’s only by entering the Valley itself that visitors can see such sandstone formations as the Mittens, Elephant Butte, The Three Sisters, The Hub, Totem Pole, Rain God Mesa, The Thumb, and more. There are two ways to do this – on guided tours by vehicle, hiking, or horseback conducted by licensed Navajo guides, or by driving the 17 mile “road” yourself. 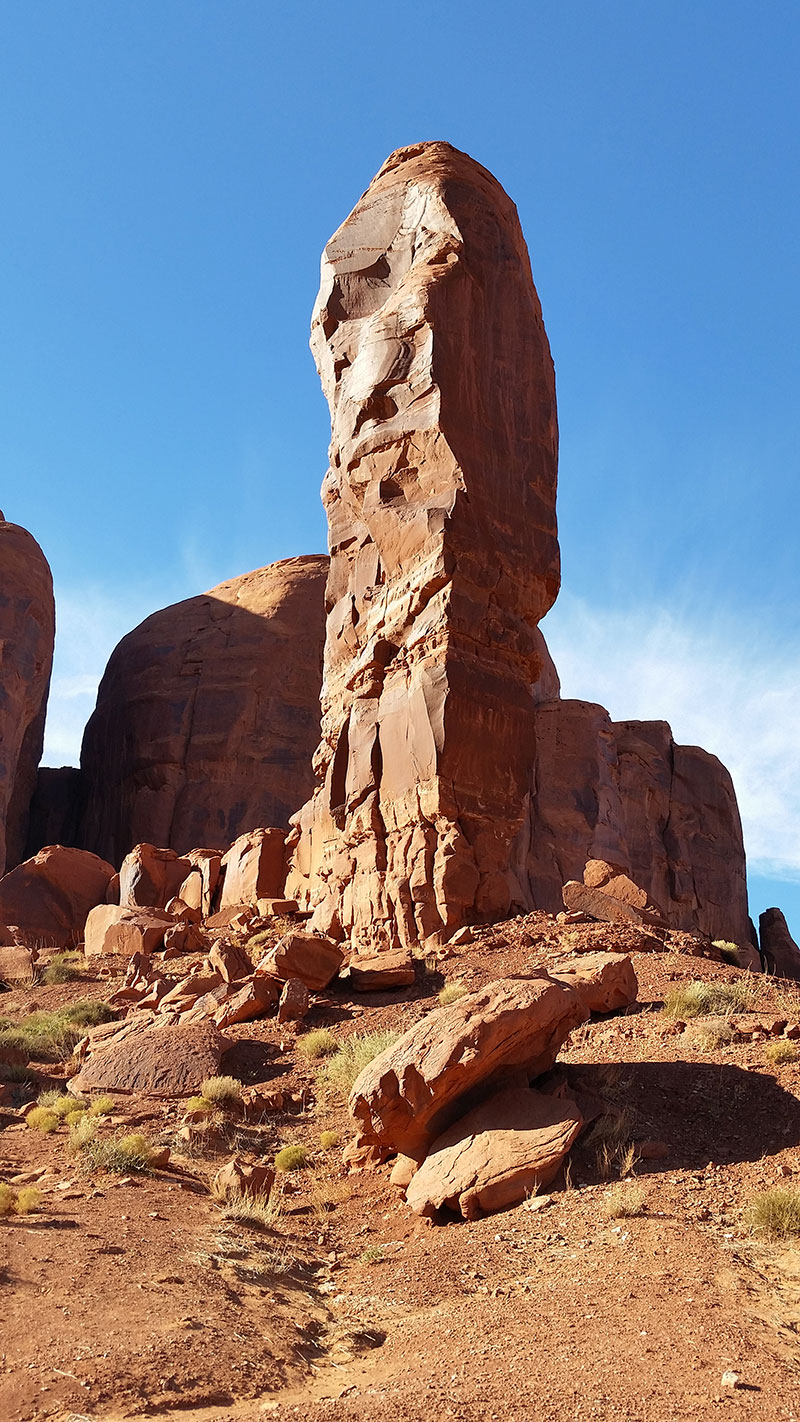 On our most recent trip, we did the drive in our 4-wheel drive SUV, and it was certainly a bit precarious. Do NOT attempt to take an RV on this road – it is unpaved, full of pot holes from erosion from the rains, and extremely bumpy in spots – well, actually most spots. The visitor center provides a brochure and map depicting the various formations, and they are well-identified with signs. The official tour guides are allowed to drive into some areas that are closed to the driving public, offering even more thorough and detailed views of rock art, ruins, and formations, all with a knowledgeable guide.

Nearby Kayenta, Arizona, is the closest town to Monument Valley, and does offer a number of motels although no campgrounds. However, the historic Goulding’s Trading Post has now opened a beautiful private campground, just outside of the park entrance, and offering full hookups. Facing east, this area offers beautiful sunrise views of the Valley, and when the sun sets in the evenings, the surrounding rocks take on an even more intense red glow. Roads are excellent to get to the park and the visitor center. 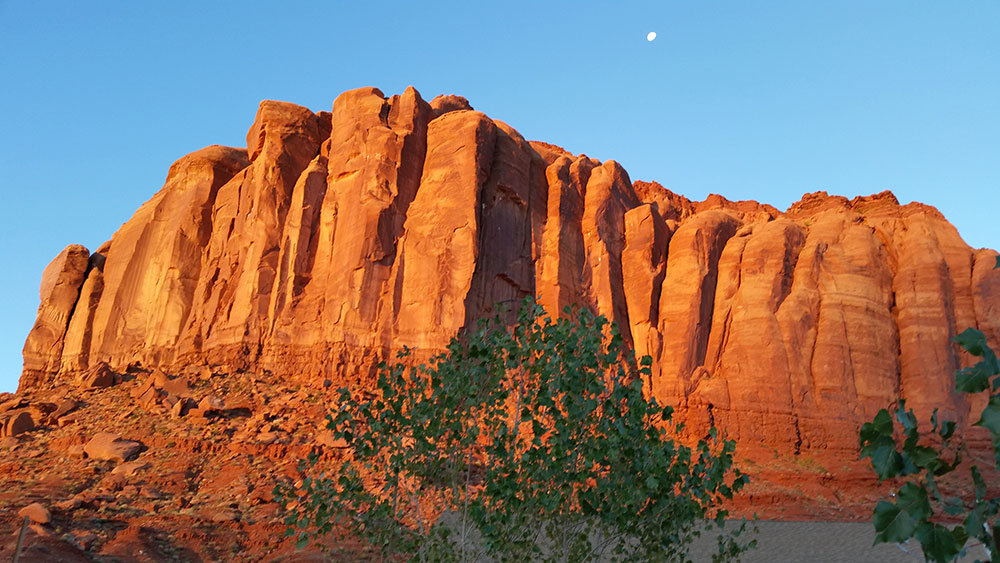 Goulding’s Trading Post is an interesting story unto itself. A sheepherder by trade, Harry Goulding moved to Monument Valley in 1923, driving a Model T and living off the land, just like the Navajo. He purchased 640 acres in the area and started trading with the locals out of a tent, moving his new bride Leone (who he called Mike) to Monument Valley. In 1928, the Gouldings completed construction of an old stone trading post with an apartment upstairs where they lived. Today, that building has been converted over to a museum where you can see photographs and memorabilia of their lives in the area.

The depression years made things very tough for the Navajos and the Gouldings. Harry and Mike caught word that a movie director, John Ford, was looking for a place to film a western movie. Harry took photos of Monument Valley to John Ford who fell in love with the area, and began his career of making Western movies, hiring Navajo locals and bringing a huge amount of commerce to the Valley. 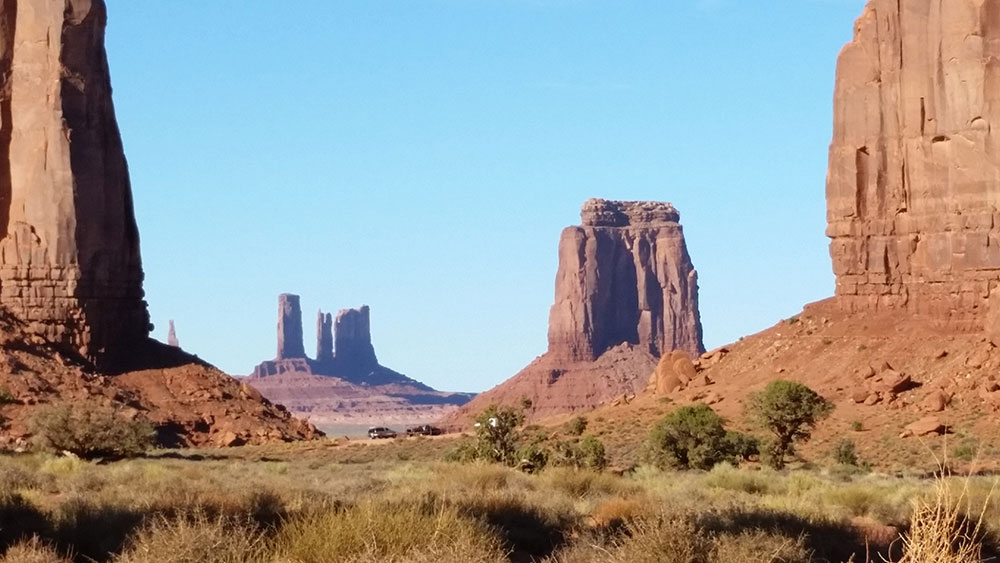 Harry and Mike were also lifelong friends of the Navajo people. Even although they sold their trading post and properties some years ago, the new owners of Goulding’s still donate toward a scholarship fund for Monument Valley students and find other ways to assist the Navajo people. The trading post still exists, along with a hotel, restaurant, and even a conference center.

Most of the actual residents of Monument Valley live on the land their ancestors settled. Most no longer farm, but rely on sales of native jewelry, photographs, and crafts to tourists. They have chosen to live in the Valley with no running water or electricity and those jarring dirt roads. As a visitor, you are not just touring another public park, but rather a landscape these people call home.

It’s a proud and sacred land – and we are fortunate to be able to visit it again and again.

14 Responses to “On the Road with Sue: Monument Valley Navajo Nation Tribal Park”