When the National Park Service began work on the ultra-scenic Natchez Trace Parkway in 1934, the vision must have been akin to the idea of going to the Moon. This 440-mile ribbon of asphalt is monumental. That being said, we found a major divide between its history and beauty as opposed to the actual experience of touring the roadway. 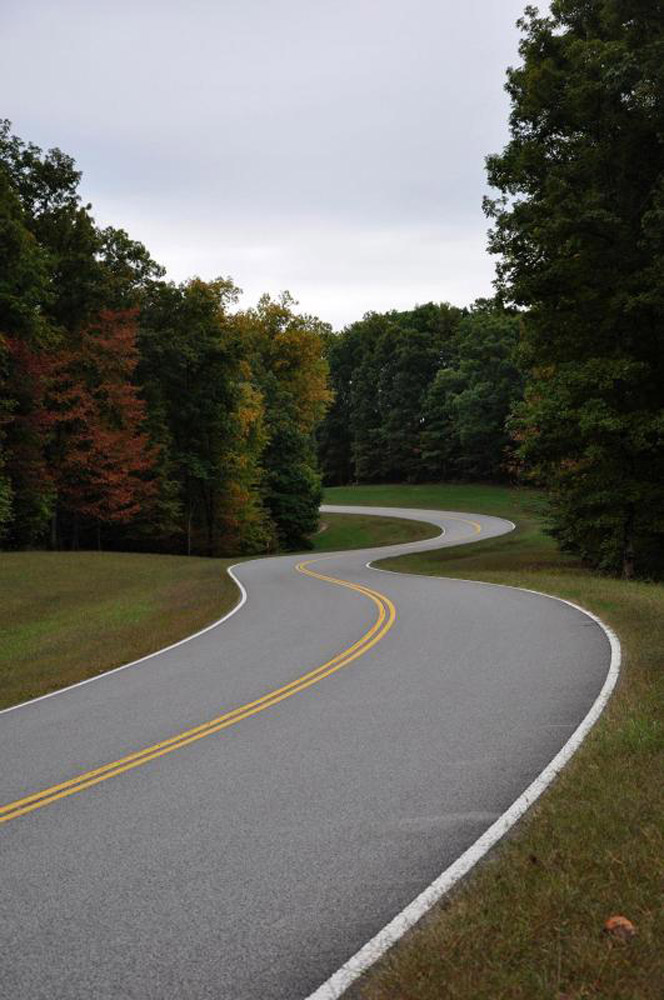 In the early 1800s, riverboats loaded up produce on flatboats in the Midwest (at that time it was The West) to ship down the Mississippi River to New Orleans. Long before paddle-wheelers were able to ply up and down the fast-moving river, boats couldn’t go very far upriver, so the crewmen walked or rode horseback 175 miles to Natchez, Mississippi, where they joined the heavily traveled dirt path that became known as “the Trace.” 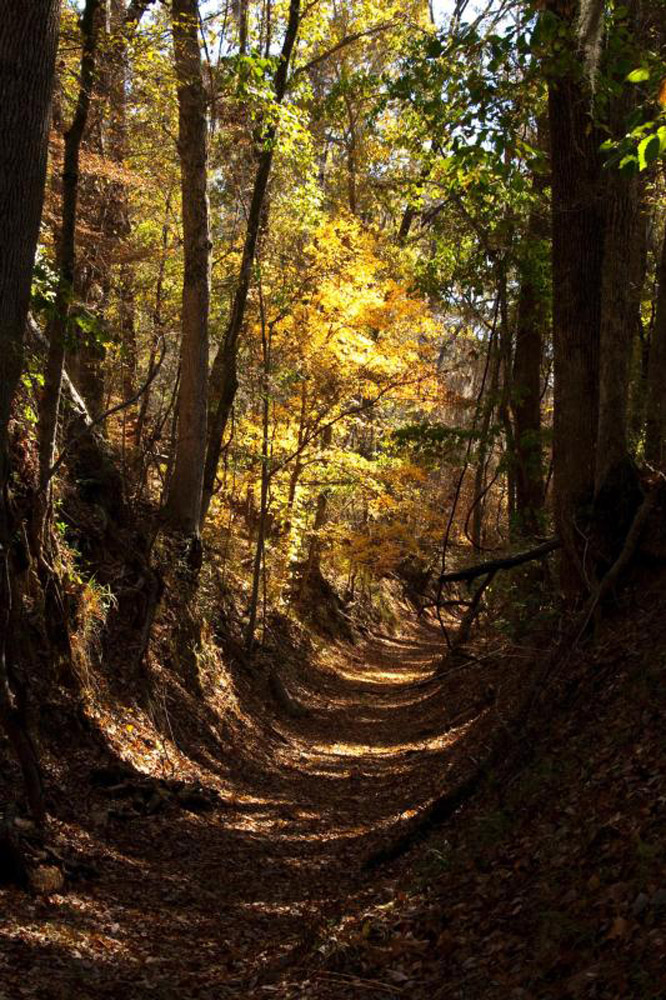 Thousands of travelers on foot and horseback wore down the “Old Trace” trail, which can be seen in many places adjacent to the roadway. The Old Trace was the main road through the Old Southwest, connecting Natchez to Nashville by going through Chickasaw and Choctaw lands.

The journey took them along numerous farms and outposts, a slow climb northward to Nashville, where they could continue on the Cumberland River. Without a doubt, the road is ultra-scenic, lined with a variety of hardwood trees, rustic fences, pastures, swamps and flowers. Many of the landmarks along the way that take you back to the 19th Century are open for touring. It’s definitely worth the trip. 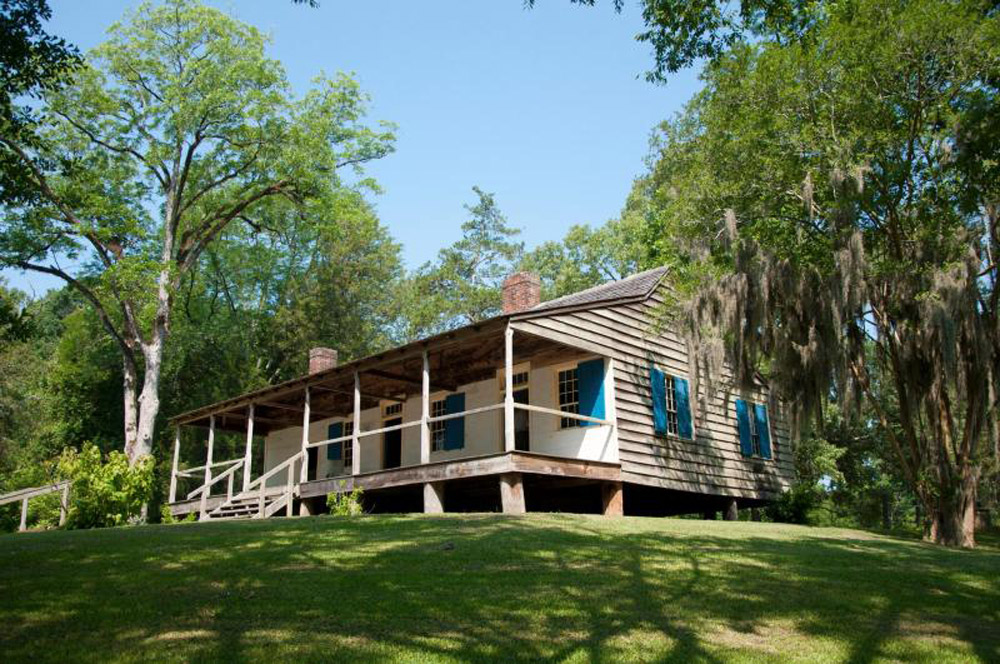 Mount Locust served as a family home and as a stand, or inn, for Natchez Trace travelers. Built around 1780, the home and grounds are open for visitors during operating hours.

By now you’re wondering how I could be so praising and still call it a “major divide.” Put yourself behind the wheel or in the passenger’s seat on a two-lane ribbon of blacktop confined on all sides by trees and pastures for 100 miles, then 200 miles, then 300, and 400 and longer.

You will want to stop at some of the historic attractions, but after the first few, you’ll probably want to keep going, in an effort to get off the Trace to find a place to settle in for the night.

In retrospect, we traveled the scenic byway in May, when the trees showed off their rich green colors; however, from what we have since seen on the Park Service website, “it’s showtime” in the fall, when the hardwoods display a riot of reds, golds, purples and other fall hues. We did enjoy the delicate white blossoms of dogwoods and the rich flowers of the redbuds.

For us, always looking for adventure, we crave variety. If you’re not always eager to find out what’s over the next hill, then you’re want to experience the road the way it was designed, a historically casual tour.

On our first outing, about 75 miles along the way with two stops after Natchez, we exited, fueled up, and continued on standard Mississippi streets and byways for another 50 miles. Then we rejoined the Trace for another jaunt, and continued to interlace the trip with segments on the Trace and then off again; however, we did dry camp in beautiful state parks along the route. 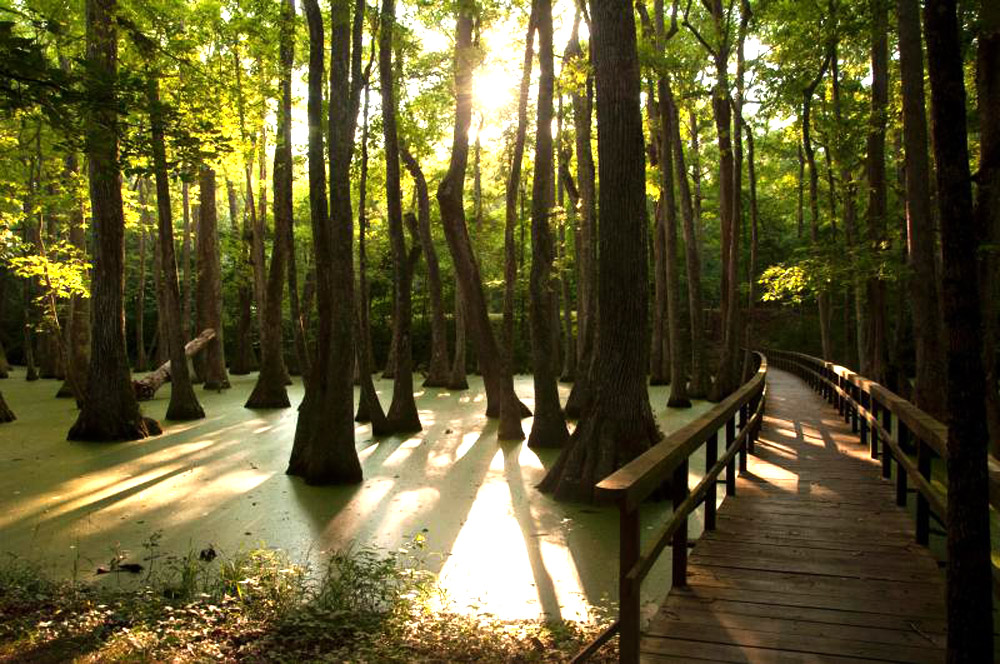 A short trail over and around Cypress Swamp (Milepost 122) enables travelers to see turtles, alligators and a variety of birds.

Since there is so much to know about driving the Trace, rather than trying to hit the high spots or summarize the entire road in one article, you’ll do well to check out the web, where there’s a wealth of information to consult, starting with the Park Service site. It’s a good idea to look at the attractions along the way before you start in order to set your priorities on what you want to see, where to stay, where to get fuel, what is on parallel state roads, etc.

The parkway is popular with RVers, but with restrictions. Maximum length of RV and tow vehicle is 55 feet, with a height restriction is 14 feet. The parkway can accommodate an RV weighing up to 40,000 pounds. Speed limit is 50, but it slows to 40 mph for a lengthy stretch.

Natchez Trace Parkway may not qualify as “A Road Less Traveled,” although we didn’t encounter many vehicles in either direction, but its isolation fits in the category (maybe with an asterisk). A highly recommended road trip, but it’s best to know what to expect before your embark.

5 Responses to “The Never-Bored RVers’ Journal: The Natchez Trace”