For decades, driving south from Durango, Colorado, I’d seen the somewhat innocuous signpost for Mesa Verde National Park. I’d always intended to stop, but never did… until this trip. First impressions can be deceiving – for Mesa Verde (which means “Green Table” in Spanish), turns out to have much, much more to do and see than I expected, offering a spectacular look into the lives of the Ancestral Pueblo people who made it their home for more than 700 years, from AD 600 to 1300. 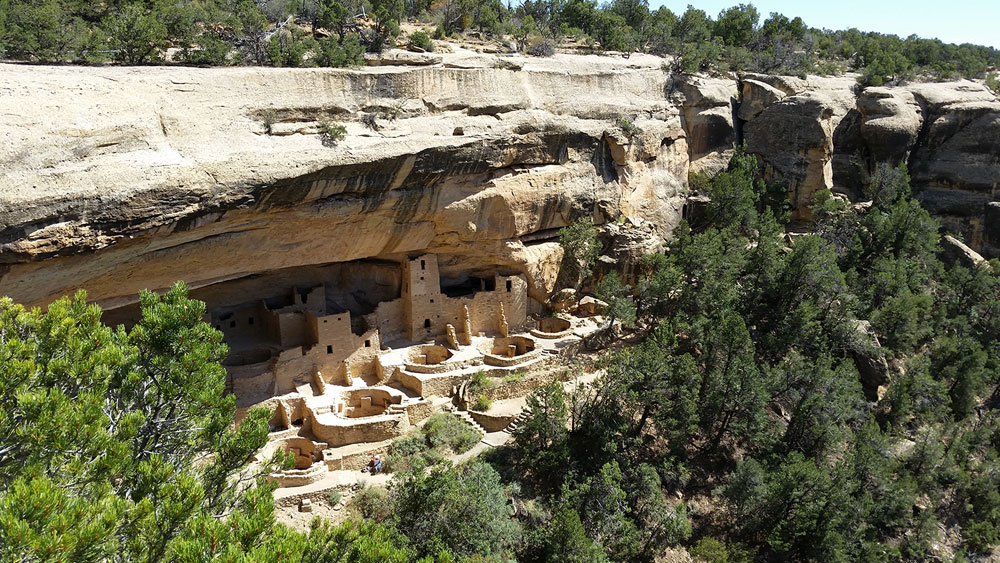 Today the Park protects nearly 5,000 known archeological sites, including 600 cliff dwellings, with many more yet to be discovered. These sites are some of the most notable and best preserved in the United States. The park’s archeological research brings to life the ancestral Puebloan culture of the southwestern United States, with a highly trained staff preserving these sites for future generations.

After entering the Park, (and that America the Beautiful pass works here) it’s best to stop at the beautiful new Visitor and Research Center, located near the Park’s entrance. There, you can acclimate yourself to a very different National Park – one where you drive over 23 miles of road and stop to view the various dwellings which have been excavated and prepared for visitors.

The best way to actually get into these habitats is on daily guided tours, and two of them can be quite strenuous. Cliff Palace, the largest cliff dwelling, offers a daily tour beginning at Cliff Palace Overlook, which is a one-hour drive from the Visitor Center. Total walking distance is only a quarter mile, but it does involve climbing five ladders on a 100-foot vertical climb to reach the dwelling. The one-hour ranger-guided tour to Balcony House involves climbing a 32-foot ladder, crawling through a 12-foot-long tunnel, and climbing up a 60-foot open rock face with two 10-foot ladders to exit the site. If you’re interested in either of these tours, check the Park website ahead of time as they are sometimes closed due to research and preservation activities. And if you’re not up for climbing ladders, both of these sites can be viewed from lookout points above. 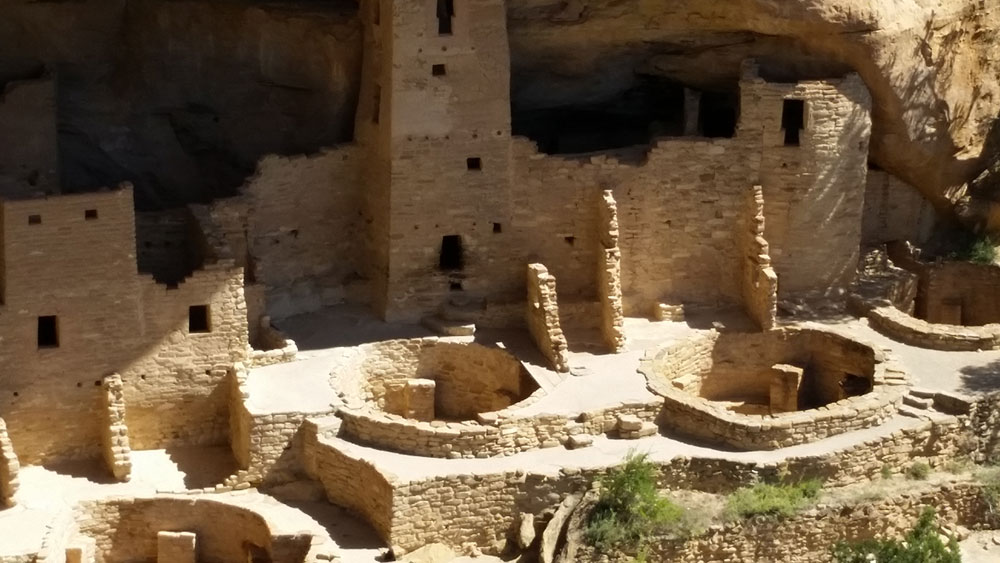 There are also a number of self-guided tours to several other Mesa Verde discoveries. We walked the 2.25-mile round trip trail through Badger House Community – an easy graveled and paved trail taking you through 600 years of history. Mesa Top Loop Road is a 6-mile driving tour with many easy and short trails to twelve sites, including surface dwellings and cliff dwelling overlooks.

RV camping is available in the Park at Morefield Campground, just four miles from the entrance. With 267 sites, the park is rarely full, although there are only 15 full hookup sites which usually require reservations. Several of the Park’s best hikes leave from Morefield and climb to spectacular views of surrounding valleys and mountains. Every evening, campers can attend campfire talks presented by park rangers at Morefield Amphitheater, a tradition that dates back to 1907 when Mesa Verde National Park was first founded. There’s even an all-you-can eat pancake breakfast at the café in Morefield’s full-service village, along with a gas station, RV dump station, coin-operated laundry, complimentary showers, a gift shop, and grocery store. The campground is only open during summer months.

As with most National Parks, activities with pets are limited. They are not allowed on trails, in archeological sites, or in buildings (service animals excepted). Pets may be walked along paved roads, in parking lots, and at the campground. However, there are some marked pet-friendly trails on Wetherill Mesa, including the 5-mile Long House Loop.

Related article: Traveling with Pets in Your RV: Things to Consider 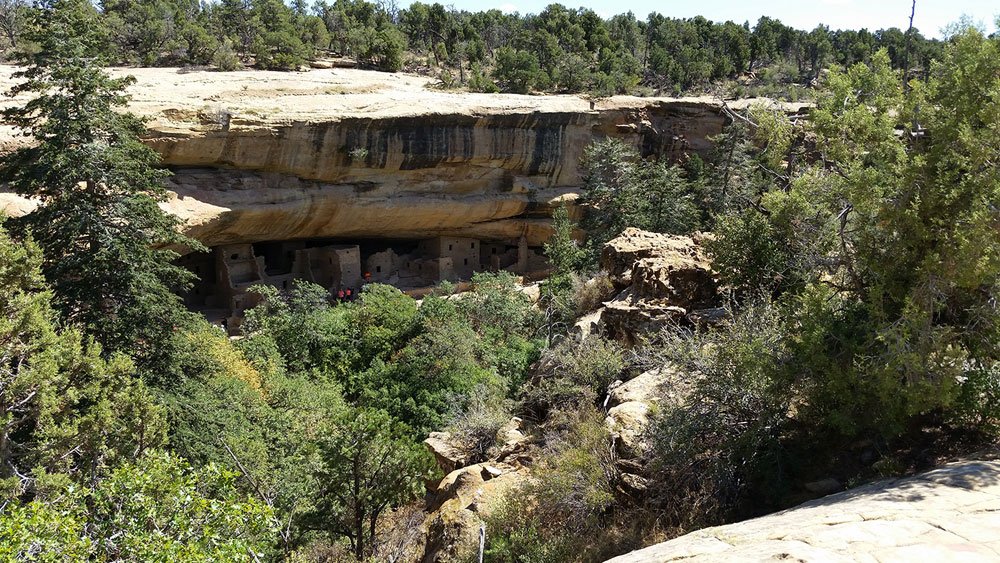 The Four Corners region has a long rich history beginning 1,400 years ago, long before Europeans explored North America. For more than 700 years, Native Americans and their descendants lived and flourished here, building elaborate stone communities in the canyon walls, and farming the surrounding plateaus. In the late AD 1200s, they moved away, leaving behind their homes, their tools, their pottery, and other items depicting their rich culture.

Cliff Palace was rediscovered in the late 1800s and proved to be an attraction for visitors, many of whom recovered and removed all types of artifacts. What once had been an imposing assemblage of buildings, court yards, and kivas built into the side of the imposing rock walls began to slowly deteriorate due to the elements and over-enthusiastic visitors, looters, and scavengers. 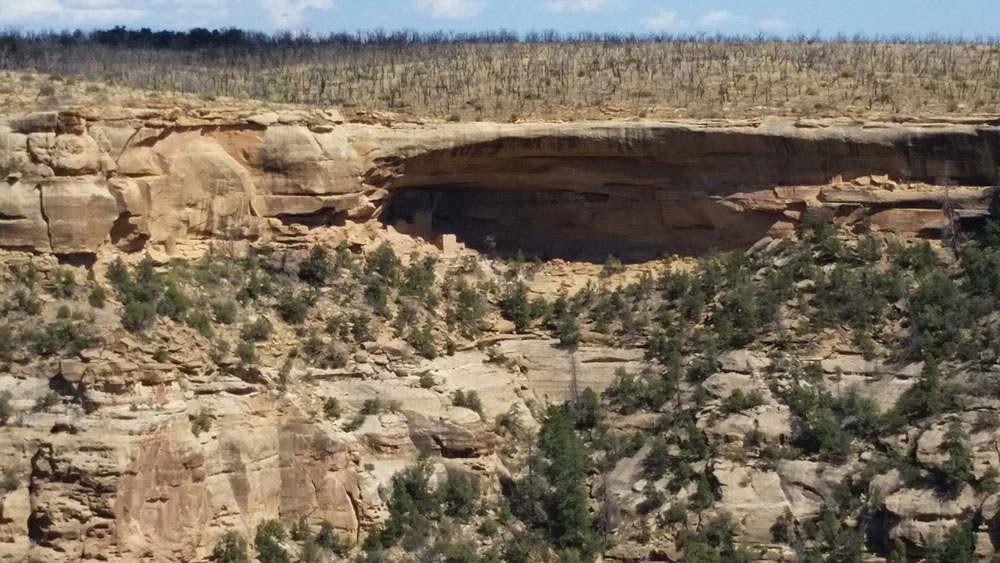 In 1906, Theodore Roosevelt established Mesa Verde National Park, in order to “preserve the works of man” saving Cliff Palace and the other ancient dwellings found in the area. Smithsonian archeologist Jesse Walter Fewkes designed field methods to excavate and collect artifacts, thus preserving the sites for future visitors. Fewkes also realized the importance of preparing archeological sites for visitation. He believed it was only through direct experience, literally being able to walk through a cliff dwelling, that the American public could appreciate and support the preservation of Mesa Verde’s archeological resources. And that is how these treasures became available for us to view today.

You’ll find that visiting Mesa Verde is not your typical National Park experience. It’s a unique and unforgettable trip to experience the wonders of the past.

Editor’s note: A familiar name to many RVers, Sue Bray has worked in the RV industry for 35+ years. Over the summers, Sue, her husband Mel, and their boxer Harley travel the country in their 31’ fifth wheel, with no exact plans except to have an adventure. She chronicles their travels as well as lessons learned along the way in this ongoing blog series.

5 Responses to “On the Road with Sue: Mesa Verde National Park”