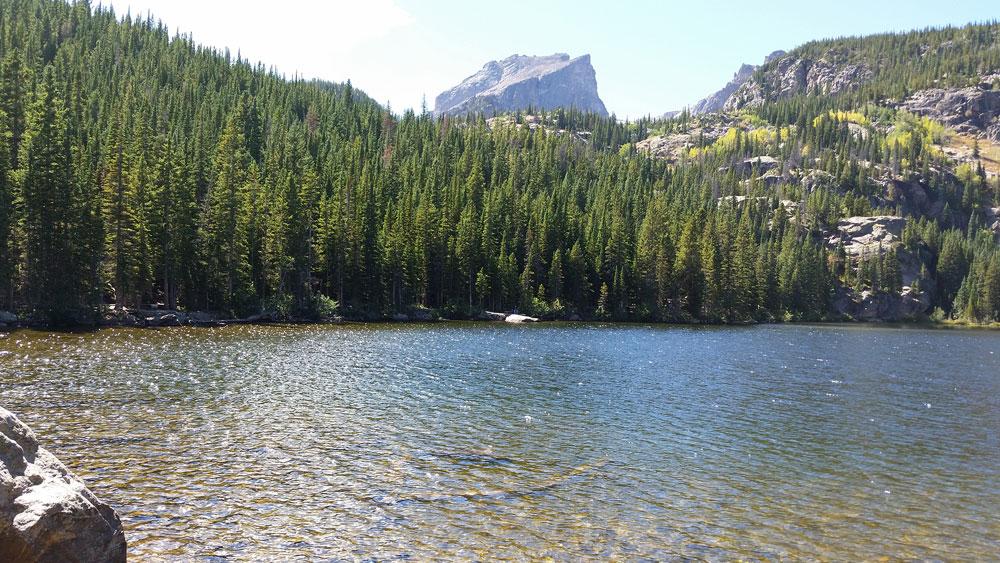 Colorado’s Rocky Mountain National Park is 415 square miles of some of the highest terrain in the world. It encompasses the Continental Divide, and those mountain peaks are surrounded by alpine lakes, forested valleys, and a wide range of plants and animals.

About 11,000 years ago, early man ventured into these valleys and mountains, hunting for food. Later, the Ute Indians and other tribes would travel through this area in summer months, with the Utes dominating the others in their hunts, fishing, and searches for food. In 1803, the U.S. government acquired this land through the Louisiana Purchase, however, most explorers and fur trappers bypassed the area due to its ruggedness. Then in 1859 the Pikes Peak gold rush attracted miners and speculators, and small rather rowdy settlements and homesteading were established on this land which is now the Park. Although the winters were harsh, the abundant water and wildlife proved to be main attractions not just to settlers but eventually also to tourists.

By 1900, Theodore Roosevelt was leading a national conservation and preservation movement, which further attracted visitors to the area. And in 1909, Enos Mills, a naturalist, nature guide, and lodge owner, championed the creation of the nation’s tenth national park. President Woodrow Wilson signed the Rocky Mountain National Park Act in 1915.

During the 1930s’ Depression, President Franklin Roosevelt created the Civilian Conservation Corps to put people to work. In Rocky Mountain National Park, these folks built roads, trails, and buildings. They put out fires, planted wildflowers and trees, and worked with the Park Service to build Trail Ridge Road – the highest paved road in the United States, crossing the Continental Divide at 12,000 feet. 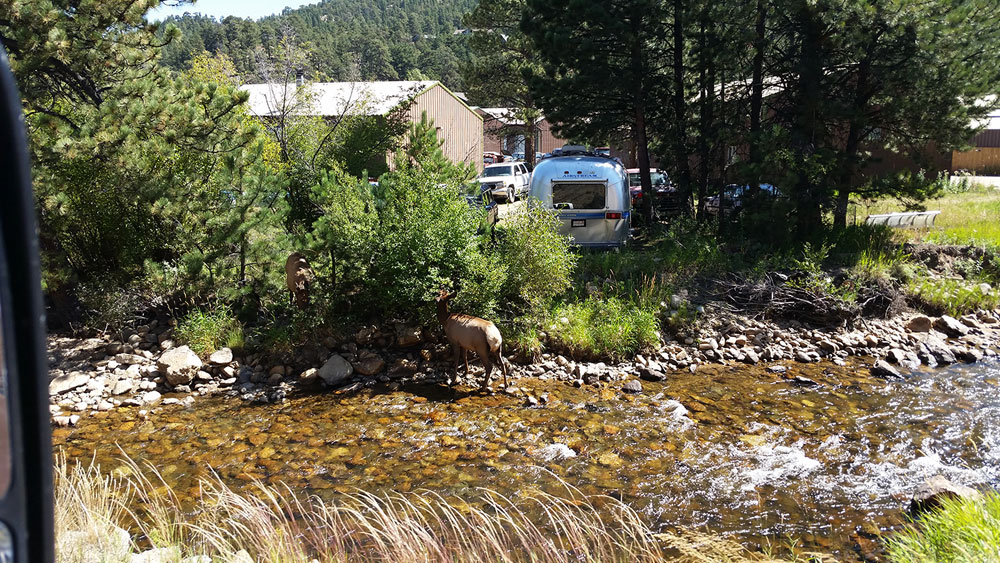 Today, visitors still drive Trail Ridge Road, although it’s not advisable to do so in a large RV. We drove the road in our tow vehicle, and although we observed a couple of smaller motorhomes parked near the Alpine Visitors’ Center near the top, we’d recommend leaving the trailer or large motorhome behind before making the crossing.

As a result, RVers need to camp on one side or the other in or nearby the Park. There are five campgrounds within the Park, and four are open to RV camping. Aspenglen and Timber Creek campgrounds are limited to RVs no longer than 30 feet; Glacier Basin can accommodate rigs up to 35 feet. All are closed during the winter months, with the exception of Moraine Park, which is open all year and can accommodate RVs up to 40 feet long. This campground is located in a ponderosa pine forest above the meadows of Moraine Park. In the summer it has 244 reservable sites, but in winter there are only 77 available on a first-come, first-served basis. As always, reservations are highly recommended to get into any of these campgrounds during the busy summer months, and can be made through Reserve America.

There are a number of private campgrounds in Estes Park, a beautiful and extremely popular small town with loads of restaurants, shops, golf, and attractions for all ages. Sitting adjacent to the east entrance of the Park, the town provides free continuous shuttle bus transportation throughout the community, which is a great idea as the streets can be extremely congested during summer weekends. At more than 100 years old, the famous Stanley Hotel overlooks the town, and offers ghost tours and fine dining. There is boating on Lake Estes, and tons of hiking, biking, and horseback trails in the adjacent forests and meadows. Be sure to look for a group of elk who have basically taken over a section of town, wandering through gardens, parking lots, and campgrounds, munching on plants and napping in the shade. 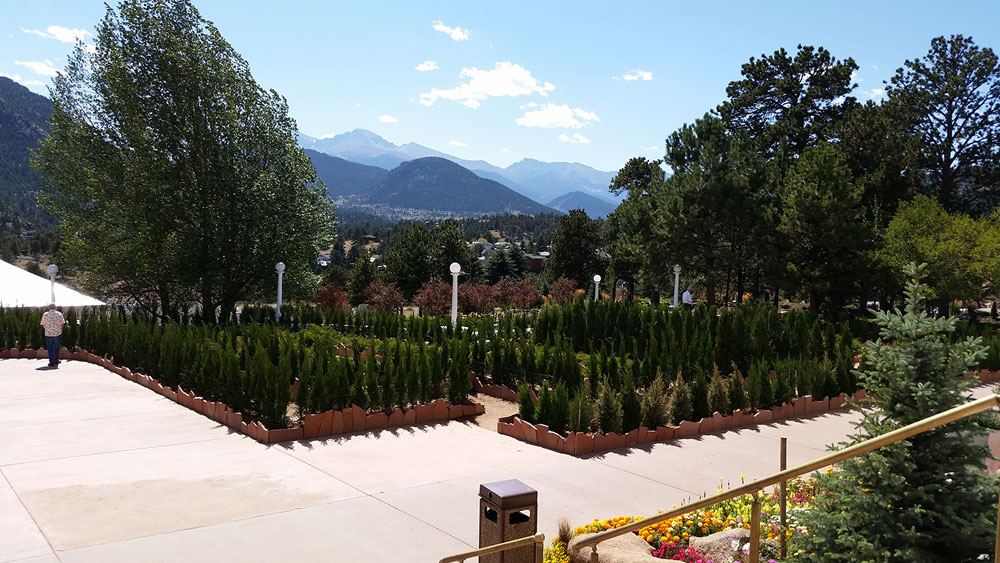 Tips for Enjoying the Park

Within the Park, there are 355 miles of hiking trails, ranging from flat trails by the lakes to steep mountain climbs. Keep in mind that elevations range from 7,500 to 12,000+ feet, and initially even very fit individuals may experience altitude problems. The “thinner” air at these heights means you’ll need to drink plenty of water and wear sunscreen and hats, as there is less atmosphere for sunlight to pass through.

Like other National Parks, pets are not permitted on the trails within the Park, although they are allowed in areas which can be accessed by vehicles, including picnic areas, campgrounds, roadside stops, and parking areas. Dogs and cats are considered to be unnatural predators in a natural environment, and may also be prey for mountain lions and coyotes. However, private and commercial horseback riding is permitted on 260 miles of the Park’s trails, and there are two stables located in the park, where horses may be rented for trail rides.

Related Blog: Traveling with Pets in Your RV: Things to Consider

That valuable America the Beautiful Pass works here at Rocky Mountain, providing you free admission to the park. Otherwise, the day use pass is $20 per vehicle, or $30 for a weekly pass. And just to make it more worthwhile, the Park’s website states that America the Beautiful pass holders get 50% off the $26/night camping fee! (Let us know if this works for you!)

Back in 1909, Enos Mills, the conservationist who was mainly responsible for getting this gorgeous area its National Park designation, said he hoped that “In years to come when I am asleep beneath the pines, thousands of families will find rest and hope in this park.” Truer words were never spoken.

8 Responses to “On the Road with Sue: Rocky Mountain National Park”