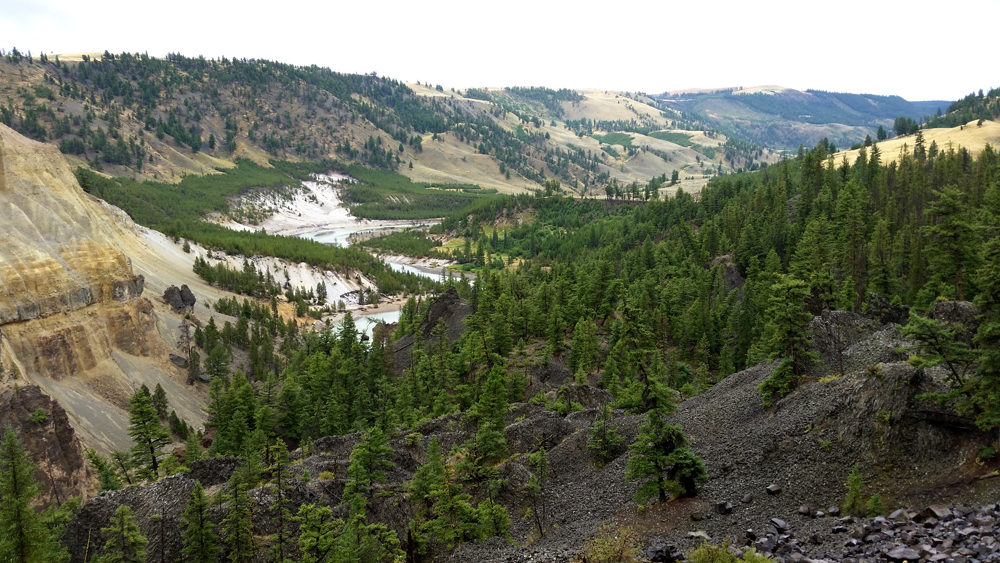 There are many publications and websites out there touting the glories of Yellowstone National Park, many with probably much more authoritative information than I can provide in this blog. But we spent a glorious week camped just outside of Yellowstone this summer, and I can share with you just some of the discoveries we made.

At 3,472 square miles, it’s huge! The Park itself is located in three states – mostly in Wyoming with a fraction in Montana and Idaho, and is 63 air miles north to south and 54 air miles east to west. It took a week to do a lot of exploring.

There are 12 campgrounds in the Park – Fishing Bridge RV Park is concessionaire operated and geared for RVs, offering full hookups. Smaller RVs can access some of the other park campgrounds, but it is dry camp only. Reservations are necessary during summer months, and should be booked as early as possible. As we had not done this (and because of the pet policy described below) we opted to stay at private campgrounds just outside the west entrance and again at the north entrance. An RVing friend recently stayed just outside the south entrance at a campground located in Grand Teton National Park, which is also just a few miles from Jackson Hole.

Understandably, pets are prohibited from the Park’s back country, the trails, and boardwalks throughout Yellowstone. They can travel in a vehicle, and walk on a leash within 100 feet of roads, parking lots, and campgrounds. Wildlife roam free here, and a loose dog could be an excellent food source for a hungry bear. 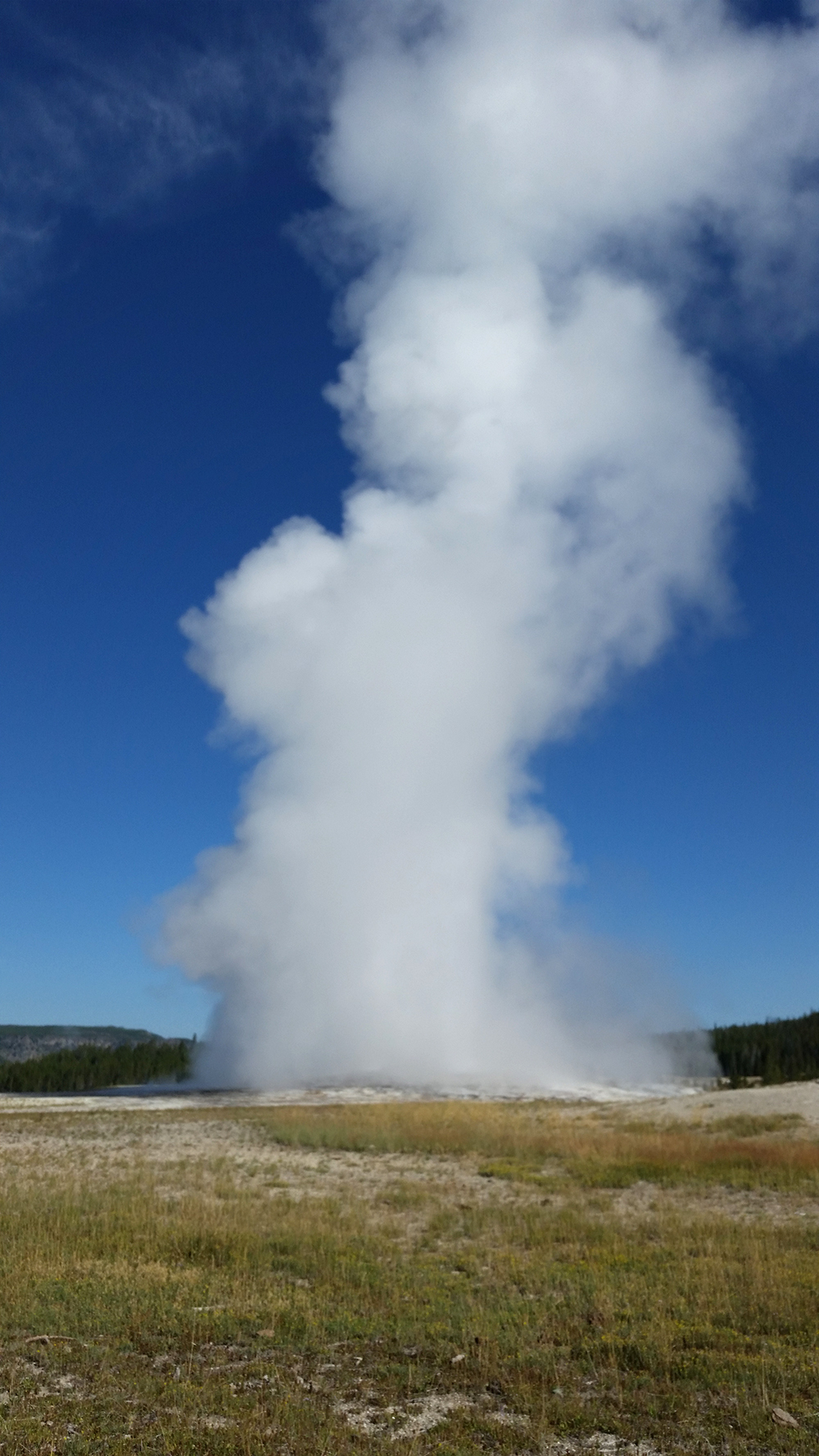 Throughout the Park, the varieties of geography and geology are astounding. Wide open prairies, mountain streams and waterfalls, enormous lakes abound. Old Faithful and the majority of the world’s geysers are preserved here. They are the main reason the Park was established in 1872 as America’s first national park – an idea that spread worldwide. A mountain wilderness, home to grizzly bears, wolves, and herds of bison and elk, the Park is the core of one of the last nearly intact ecosystems in the Earth’s temperate zone.

There are five entrance stations in and out of the Park, and we managed to hit them all. A friendly ranger informed us that the West and South entrances are the most popular during summer months. We got to the West entrance before 8 am and only experienced a short line; when we approached from the North entrance at about noon, the lines of traffic were long and we had about a 45 minute wait. If you aren’t staying in the Park, entry planning is important. 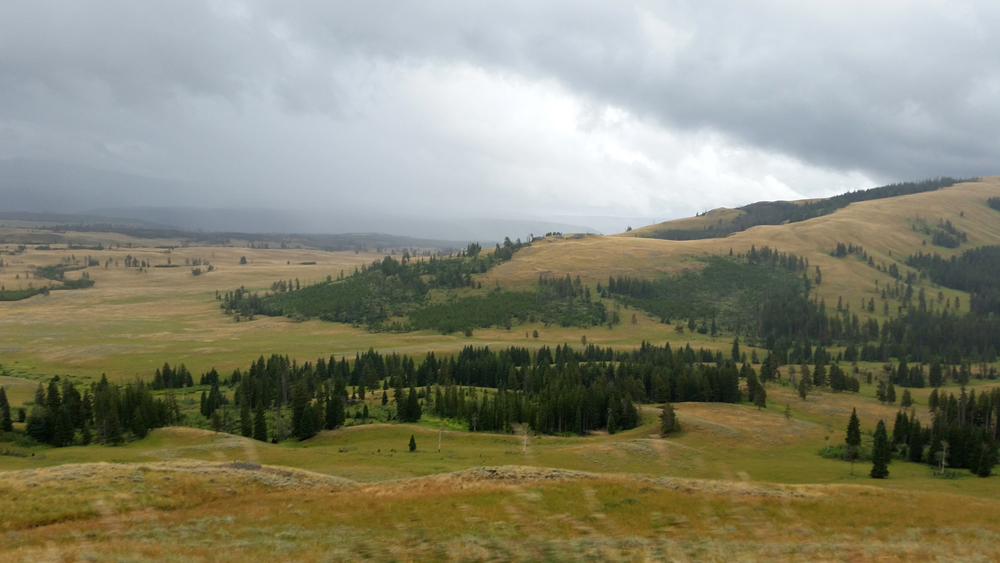 It’s a short summer season in northwestern Wyoming, and this is the only time the Park can repair or construct new roads. There were major traffic delays (over an hour for us) where long stretches of roads had been torn up and visitors were forced to drive on gravel or dirt surfaces. The Park website and newsletter update these closures or delays on an ongoing basis, so be sure to check first… we learned the hard way!

The Park is open year round, but most roads are closed (depending on weather) from early November to mid-April. The only road likely to remain open during the winter is between the North entrance and the Northeast entrance. From December through March, certain areas of the Park open up to oversnow (snowmobiles or snow coaches) vehicles. Yellowstone in winter must be magical! 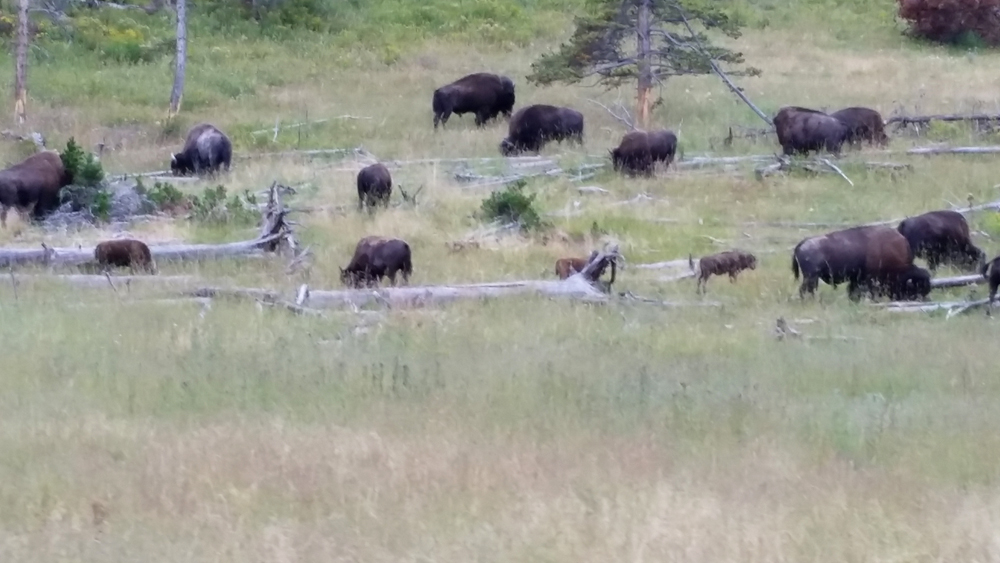 Yellowstone’s wildlife wanders throughout the Park. There are very strict restrictions on feeding wild animals – basically, they cannot be fed at all, and all garbage must be placed in the bear-proof dumpsters conveniently located throughout the Park. We saw many bison, elk, a moose, but not a bear. However, we saw several at the Grizzly & Wolf Discovery Center in West Yellowstone, just outside the Park. This nonprofit foundation takes bears and other animals that have become nuisance bears or orphaned cubs of a nuisance bear. These bears learned to obtain food from people, damaged property in search of food, or became aggressive toward people. Instead of being destroyed, the eight bears that reside at the Center were rescued and are ambassadors for their counterparts in the wild.

Realizing that it takes several days just to explore the tip of Yellowstone, the Park sells a 7-day pass for $30 per vehicle. But that wonderful America the Beautiful Senior Pass works here – for as many days as you want to enjoy the natural beauty that is Yellowstone. 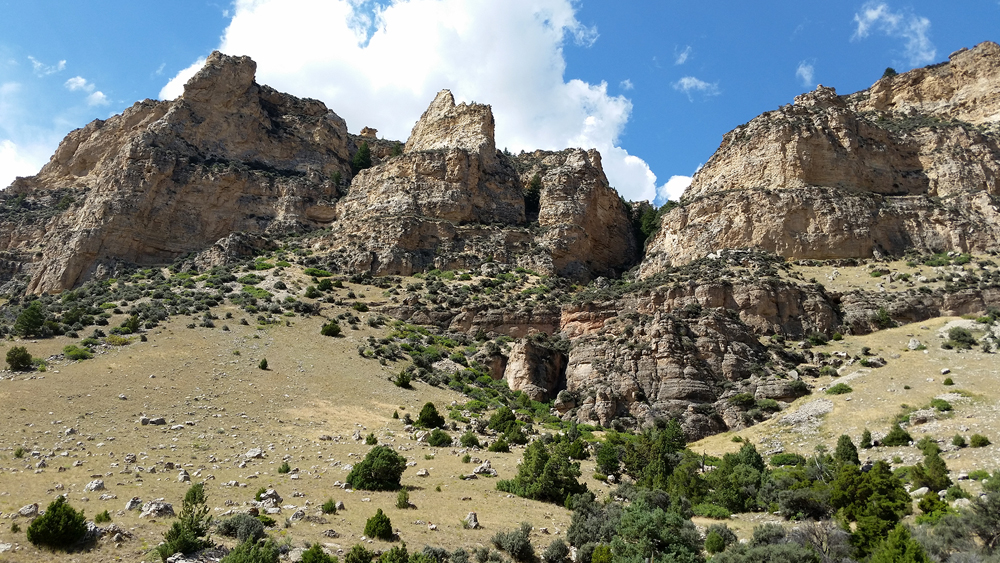 Despite its popularity and notoriety, Yellowstone is large enough and has the facilities to provide tremendous outdoor experiences for a large number of people. And everyone should get to experience it at least once. It’s a magical place.

17 Responses to “On the Road with Sue: Yellowstone National Park”