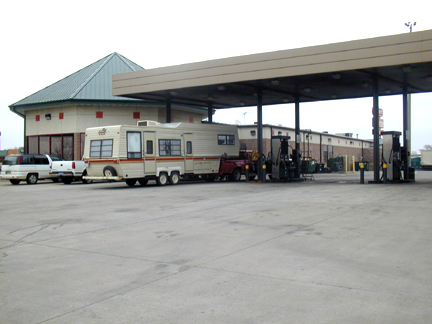 Most of us “gearheads” grew up with Regular Leaded and Premium gasoline. A product called tetraethyl lead (THL) was added to reduce engine knocks and in 1972 Unleaded gasoline was introduced. The following year, the Environmental Protection Agency (EPA) demanded the immediate phase-out of THL and by early 1980s Regular Leaded Gasoline was gone.

Unleaded gasoline blended with ethanol started to become popular in the late 1980s and early 1990s as a replacement for other additives such as benzene octane boosters. In early 2000 Ethanol increased in popularity due to skyrocketing oil prices and a desire to reduce our dependence on foreign oil. Ethanol is nothing new; Henry Ford built the first Model Ts in 1908 to run on ethanol/alcohol and Standard Oil began blending it as early as 1920 to boost octane and reduce engine knock. Prohibition put a stop to the Ethanol production, for a while. In 1940, the US Army built the first Ethanol plant in Omaha, Nebraska, to supply blended fuel for the military.

Ethanol for RVs: Just the Facts

You will find debates and arguments galore regarding the pros and cons of ethanol in just about any industry, especially in the RV industry. The pro side touts renewable fuel source, environmentally friendly, and less dependence upon foreign oil and more. The opposed side claims less mpg, harmful to engine components, the high cost of production and more as well. This article is not going to weigh in on either side, rather…

HERE ARE THE FACTS:

Therefore, we need to be educated about our options and what our engine manufacturers recommend as well. The Renewable Fuel Standards (RFS) was enacted in 2005 and expanded under the Energy Independence and Security Act (EISA) in 2007. This Act is the governing body that sets specific amounts of Ethanol to be produced and blended. 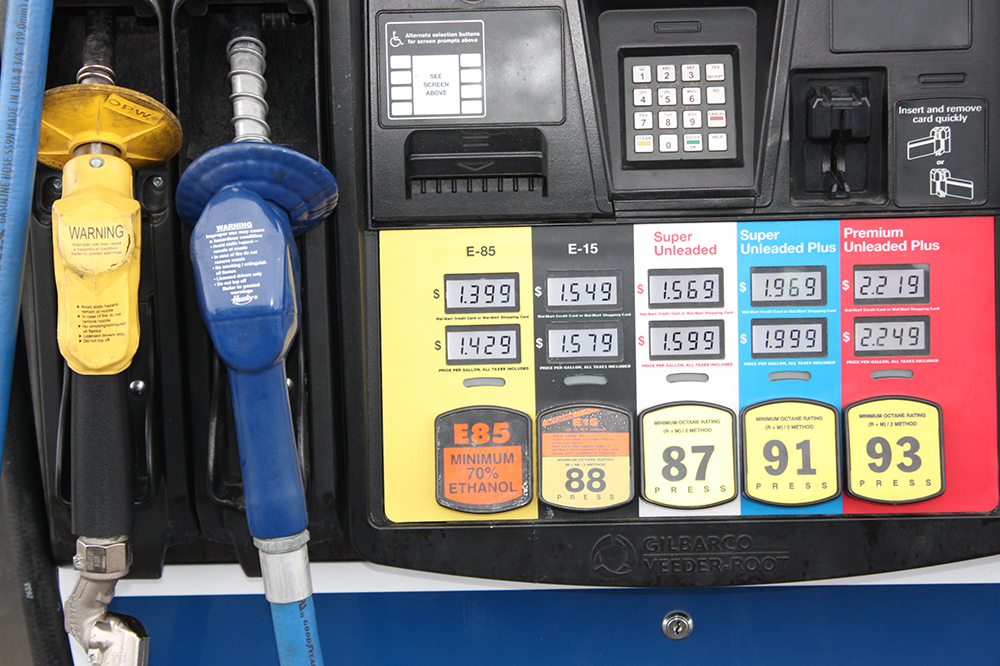 Original Ethanol blends started with as low as 2.8% and slowly increased to 10%. E10 means there is 90% Regular Unleaded gasoline and 10% Ethanol. This is blended at the local refinery so the percentages may vary throughout the country according to the Renewable Fuel Council.

The EPA approved an increase in the percentage of Ethanol to 15% and approved usage in 2011 and newer vehicles. E15 is the most tested gasoline blend on the market.

The EPA act of 1992 designated an increase to 85% Ethanol and 15% Regular Unleaded gasoline as an Alternative Fuel and provided incentives for auto manufacturers. These vehicles are known as Flex-Fuel models and can run off Regular Unleaded, E10, E15, and E85. Originally E85 was dispensed through a separate pumping area with a yellow handle. More stations today are running all blends through the same pump and sometimes even the same hose; therefore you must pay close attention to the button you select. New E85 specific pumps are now using a blue handle so it can get confusing. Plus there are different blends of E85 which are required to be labeled such as not less than 51% or not less than 71%.

Which Fuel to Use in Your RV

So, how do we know what fuel is best for our vehicle or better yet, recommended by the manufacturer? Check your owner’s manual – the chassis version – and not the RV manufacturer. According to the 2013-2016 Ford F53 Class A Chassis manual and the Ford Cutaway manual, both using the Triton V10 6.8L gasoline engine, they recommend the following:

Regular unleaded gasoline with a pump (R+M)/2 octane rating of 87 is recommended. Some stations offer fuels posted as Regular with an octane rating below 87, particularly high altitude areas. Fuels with octane levels below 87 are not recommended.

Do not be concerned if your engine sometimes knocks lightly. However, if it knocks heavily under most driving conditions while you are using fuel with the recommended octane rating, see your authorized dealer to prevent any engine damage.

This recommendation is fairly consistent with older manufacturer’s for such as Chevrolet/GMC on a Workhorse chassis using the Vortec 8.1L and several truck manufacturer’s towing a trailer.

Cummins/Onan recommends no more than 10% Ethanol for their generators.

Next, how do we know the exact blend to use? Since Ethanol is blended at the local refinery, the only true way to tell the percentage is to test it at the pump. Easy to use kits are available at www.fuel-testers.com. The kit contains a measurement/tester tube and sanitary dispenser bottles to obtain a fuel sample and add the test solution.

How to Find Regular Unleaded Gasoline

There are some places that still sell Regular Unleaded/no Ethanol gasoline but they are getting harder to find. Here are some websites that are continually updating locations with customer feedback: 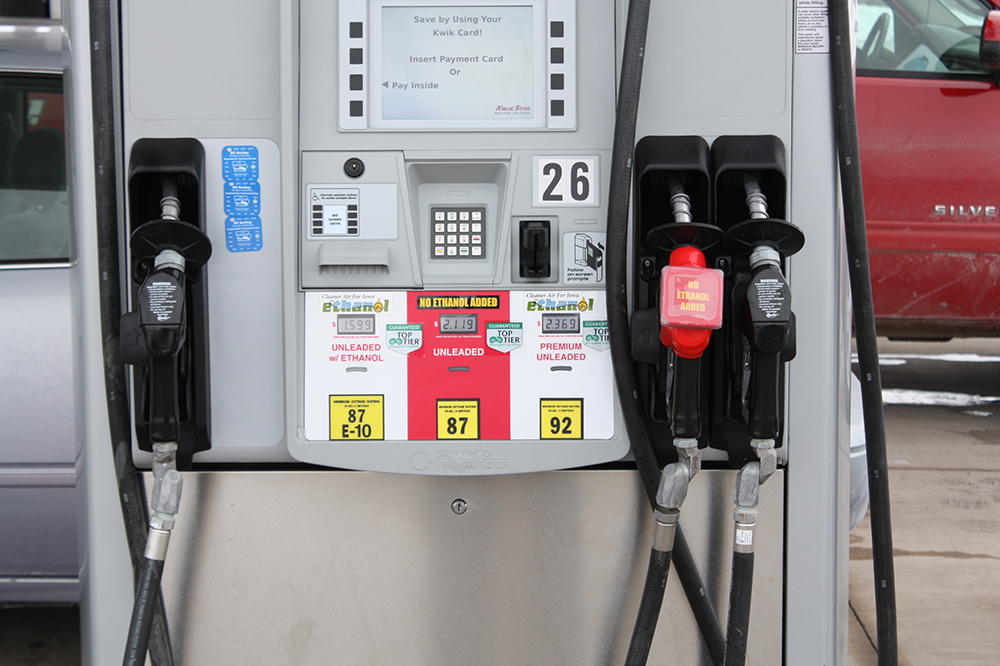 What About My Older Rig?

The biggest complaint about Ethanol in the early stages was clogging fuel filters, deteriorating rubber fuel lines, and running too hot for the engine. Although there are no documented case studies on RVs specifically, there is abundant data on the effects of E10 on components such as rubber fuel lines, gaskets in carburetors, and fuel filters. Most of the data collected from service centers throughout the country indicates models manufactured from 1981 and newer have no issues with rubber components or gas tank rust clogging fuel filters. Since this is not documented, you might want to replace the fuel lines to your engine and generator with modern day technology designed for the E10 fuel.

Ethanol, in whatever blend, is here to stay and we as RVers need to be educated. I personally purchase Regular Unleaded gasoline for my lawn mower and snow blower because of the horrible things I heard about the damage that would happen from my local repair guy. However I’ve been using E10 in my 2002 Chevy Silverado since I purchased it new and at 149,000 miles and counting, it’s still getting 20 mpg highway and I’m not telling city.

Bottom line, most manufacturers are okay with Ethanol in the correct blends for the model year. And if you accidentally fill the tank with E85 in a Non-Flex Fuel Vehicle, don’t worry. One tank will not do any damage; just drive the unit until it hits three-quarter tank and fill with Regular Unleaded 87 Octane if you can find it, or E10 and keep diluting it every three-quarter or half tank. It will burn leaner which will require your engine computer to adjust and probably turn on the Check Engine light. I have seen this happen several times and some drain the tank, but most just do this procedure. And every one that went to the dealership to have the Check Engine code verified just did a reset and they were good. Your Check Engine light will go off after a certain number of starts, or you can disconnect the negative battery cable for a certain amount of time and it will reset. Check your owner’s manual. You can take it in if you are concerned, but I hate paying $125 per hour for someone to disconnect my battery cable!

What’s been your experience with fuel choices in your RV? Let us know in the comments.