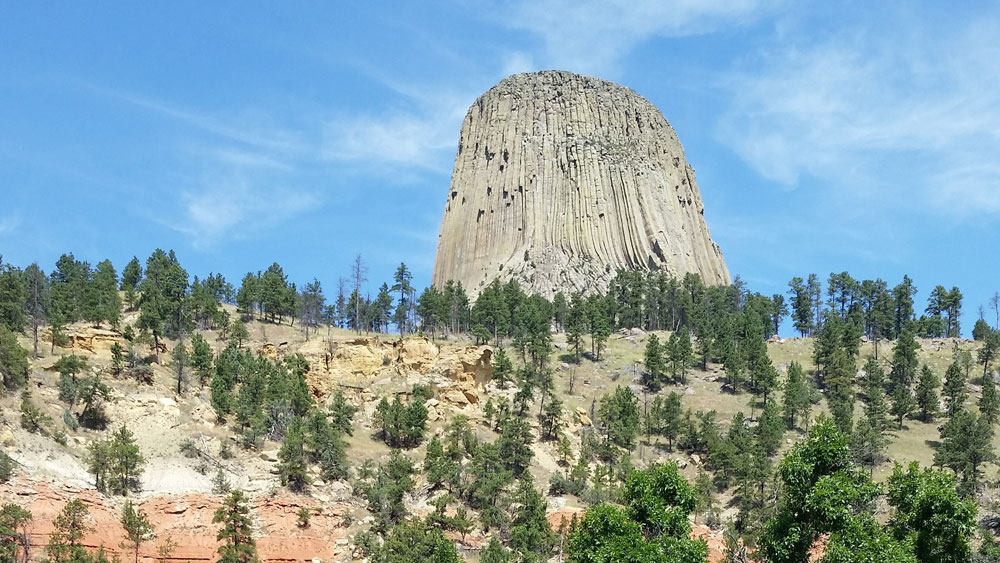 Back in the ‘70s, you probably saw director Steven Spielberg’s epic film, “Close Encounters of the Third Kind.” And if you did, you saw 12 minutes of footage from Devils Tower National Monument, located in the northeast corner of Wyoming. Throughout the movie, symbols resembling this iconic landmark appear, culminating when aliens land their space ship next to the tower in order to make their first contact with humans.

It’s not just aliens who consider The Tower to be a special place. More than 23 American Indian tribes consider this area in the Black Hills to be sacred ground, and many still come to pray and conduct sacred ceremonies. Most of the tribes have their own stories about how Devils Tower was formed, but the most well-known seems to be the Kiowa legend.

It tells of seven sisters and their brother playing together, when suddenly the boy turned into a bear. Terrified, the sisters ran away with the bear chasing them. They came to the stump of a tree, and the tree spoke to them, telling them to climb upon it. As they climbed, the tree began to rise into the air and the bear could not catch them. He tried to climb the tree, scoring the bark with his claws. The seven sisters were borne up into the sky, where they formed the Big Dipper. And Devils Tower was created.

Devils Tower is our country’s first national monument, established by President Theodore Roosevelt in 1906. There is no definite conclusion as to how it was actually formed, but geologists do agree that it is an igneous intrusion into sedimentary (softer) layers of rock, and it did not originally show through the surface of these rocks. As the softer rocks wore away from erosion, the harder igneous rock survived and began to appear. Of course, this all took about 65 million years to occur. As rain, snow, wind, and temperature changes continue to erode the rocks around the base of the Tower, more and more of it will be exposed, and at the same time, the Tower itself is slowly being eroded.

It’s a short detour off the main highway and a very pleasant drive through the Black Hills to Devils Tower, and well worth the visit. The Tower is an incredible site when you first spot it from the road, and this is probably among the best places to get some photos.

Once within the 1,347 acres belonging to the monument, there is a road circling the Tower however RVs over 19 feet are not allowed to drive on it. There is an RV parking lot, where you can unhook your tow or towed vehicle to make the drive. We opted not to unhitch, but walked around instead. The base of the Tower is about a mile in circumference and there is a 1.3 mile paved Tower Trail surrounding it. Altogether, there are about 8 miles of trails throughout the monument grounds.

Hundreds of parallel cracks in the walls divide Devils Tower in columns, making it one of the finest crack climbing destinations in the country. There are more than 200 climbing routes up its walls, although some are closed at certain times of the year due to nesting falcons, which can become quite protective of their eggs and chicks. All persons planning to climb or scramble above the boulder field are required to register before their climbs, and immediately after climbing each day. Registration is used for climber safety and also becomes part of a historical database that has been maintained since 1937.

Devils Tower offers a 40-site campground for RVs up to 35 feet, but there are no hookups. There’s a very pretty picnic area nearby. Pets on leashes are allowed in the campground, the picnic area, and the parking lots, but they are not allowed on the trails. There’s a beautiful visitor center, with interpretive exhibits explaining the history, geology, and legends of the area. There are no restaurant facilities at Devils Tower, but right outside the entrance gates sits a KOA campground and Devils Tower Trading Post, offering everything from meals to souvenirs to t-shirts and ice cream.

For us, Devils Tower was an unplanned stop – as we drove through Wyoming, we decided it would be fun for a short visit. That’s the beauty of RV travel – you can suddenly decide to turn left instead of right. And we’re glad we did it.

9 Responses to “On the Road with Sue: Devils Tower National Monument”