For most RVers, winter means putting our RVs into storage for several months, and in the upper Midwest, sometimes up to 6 months! Hopefully most of us take the typical precautions for winterizing such as adding antifreeze to the fresh water system, emptying out the water heater, and preparing for rodents! However, most RVers walk away from their stored rigs and think they can easily come back in the spring to bring them out of hibernation. Unfortunately, there are a few RV winter storage items that should be conducted throughout the maintenance process. 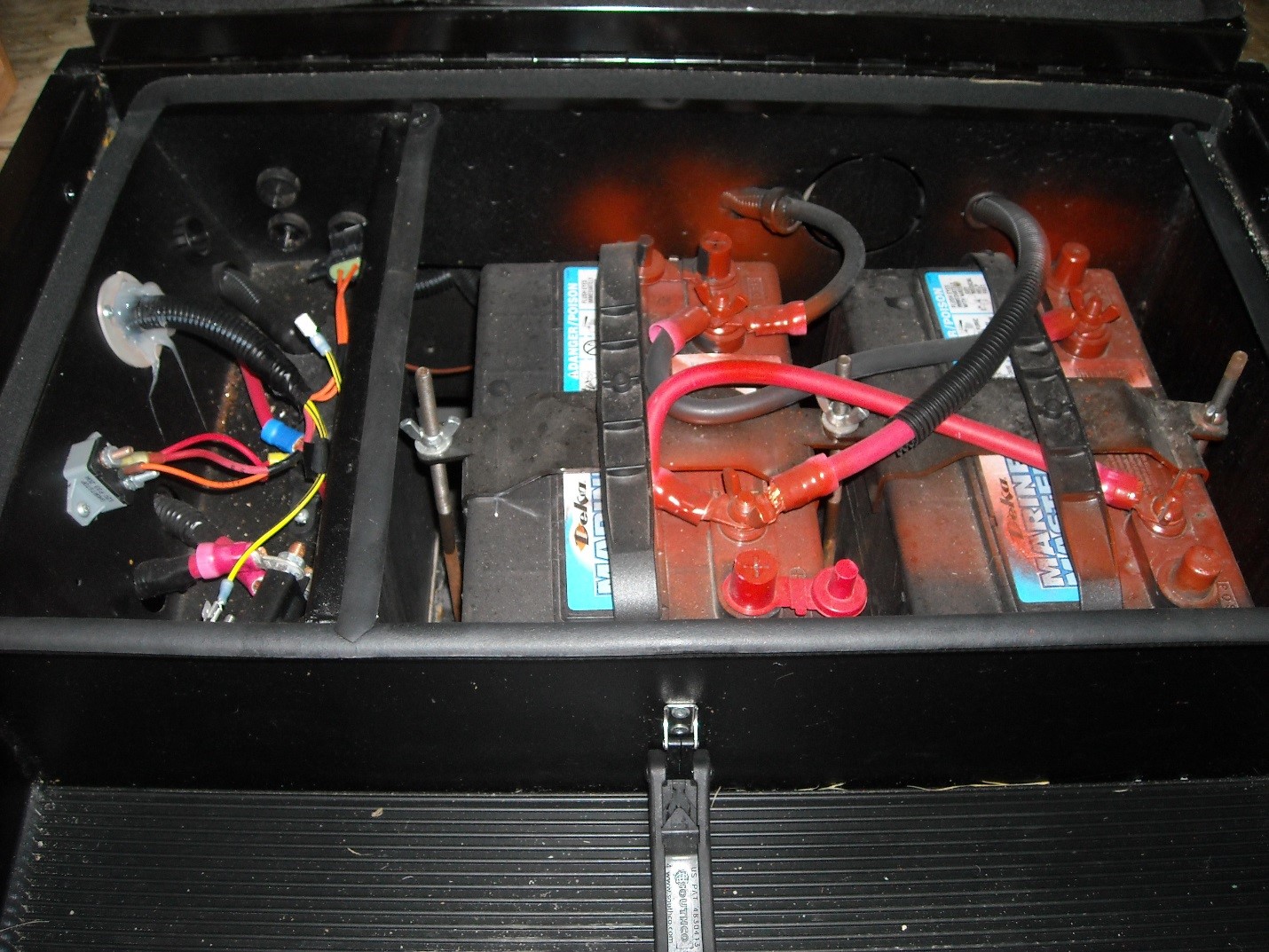 12-Volt deep cycle batteries are designed to provide continuous power for interior lights, roof vents, and other appliance for an extended period of time. They will be discharged from a fully charged 12.6-Volts to 10.5-Volts and recharged repeatedly which is called a “cycle”. These are different than automotive batteries which maintain a constant charge and are designed to provide a large amount of current for a short amount of time, or “Cold Cranking Amps” to start a vehicle.

Once the car is running, the alternator provides the power for the vehicle and the automotive battery just maintains its charge. Automotive batteries are not designed to be drained more than 20% of charge, otherwise they will weaken and become defective. Deep cycle batteries typically have thicker plates and higher quality materials used such as paste, separators, and grids. The house battery or batteries are designed only for energy storage. There are four different types of 12-volt deep cycle batteries:

Lead Acid/Flooded –These batteries are constructed with a hard plastic shell, lead plates, and an electrolyte fluid containing sulfuric acid and water covering the plates which is referred to as “flooded”.

As the energy is used, or the battery is discharged, lead sulfate crystals form on the lead plates. This condition is termed Sulfation and will limit the storage capacity of the plates. The lead acid battery needs a multi-stage or desulfation charge once a month that will break up the lead sulfate crystals on the plates, and then adds an equalizing and float charge. To get this type of multi-stage charge, you need a converter or battery charger that has this capability. Most converters are simply a charger that senses when the battery drops to 10.5-Volts and provides a 13.6-Volt charge until the battery reaches 12.6-Volts. This does not condition the batteries and they will become sulfated.

Most large (2000w+) inverters have this function, as well as larger solar panels with a controller. If your rig does not have this function, you will need to get a different charger, or install a Battery Minder which applies a high impact wave initially to break up the lead sulfate crystals and condition the battery. If you do not have power available to your rig in storage, you can get a Battery Minder with a solar panel, or remove the batteries and apply a multi-stage charger in your garage. If you do not have electricity and do have a multi-stage charger, you will need to go to your rig once a month and start the generator or bring a portable generator to condition the batteries which might take several hours!

One more issue with lead acid batteries. During the initial high voltage charge, the acid will actually boil and gas will emit from the vent holes which will deplete the acid in the battery. You will need to check and add distilled water once a month so the fluid level does not get below the lead plates.

Gel Batteries – The gel battery utilizes the same core construction with a gelling agent (usually fumed silica) added to the acid. This battery is totally sealed so it requires no fluid level maintenance, however it still can become sulfated and requires conditioning although much less than lead acid batteries. Therefore the Gel Battery does require the same multi-stage charging conditions as stated in the Lead Acid description above for units that are plugged into a 120-volt source, or not.

Absorbed Glass Mat (AGM) – AGM batteries are also sealed so there is no fluid maintenance and they are less prone to sulfation similar to the Gel, however not completely! AGM batteries were developed in the 1980’s with a very fine fiberglass mat to absorb the sulfuric acid for the military and UPS to provide a spill proof and lighter battery that requires less maintenance and can be shipped without a hazardous material label. They can be layered with plates similar to the lead acid battery or can be “spun” in a circular manner. An AGM battery can sit in storage without a charge longer as they have less self-discharge in colder temperatures and only need a desulfation charge every six months.

Lithium Ion – Since the late 1800’s lead had been the primary component used for battery plates in lead acid, gel, and AGM batteries. Lithium was introduced as a storage component in electronics for cell phones, laptops and other devices but had some issues with combustion situations in the early phases. The new chemically engineered Lithium Ion batteries introduced to the RV market have been proven winners and provide extended battery power and limited maintenance. However they come at a higher price point. 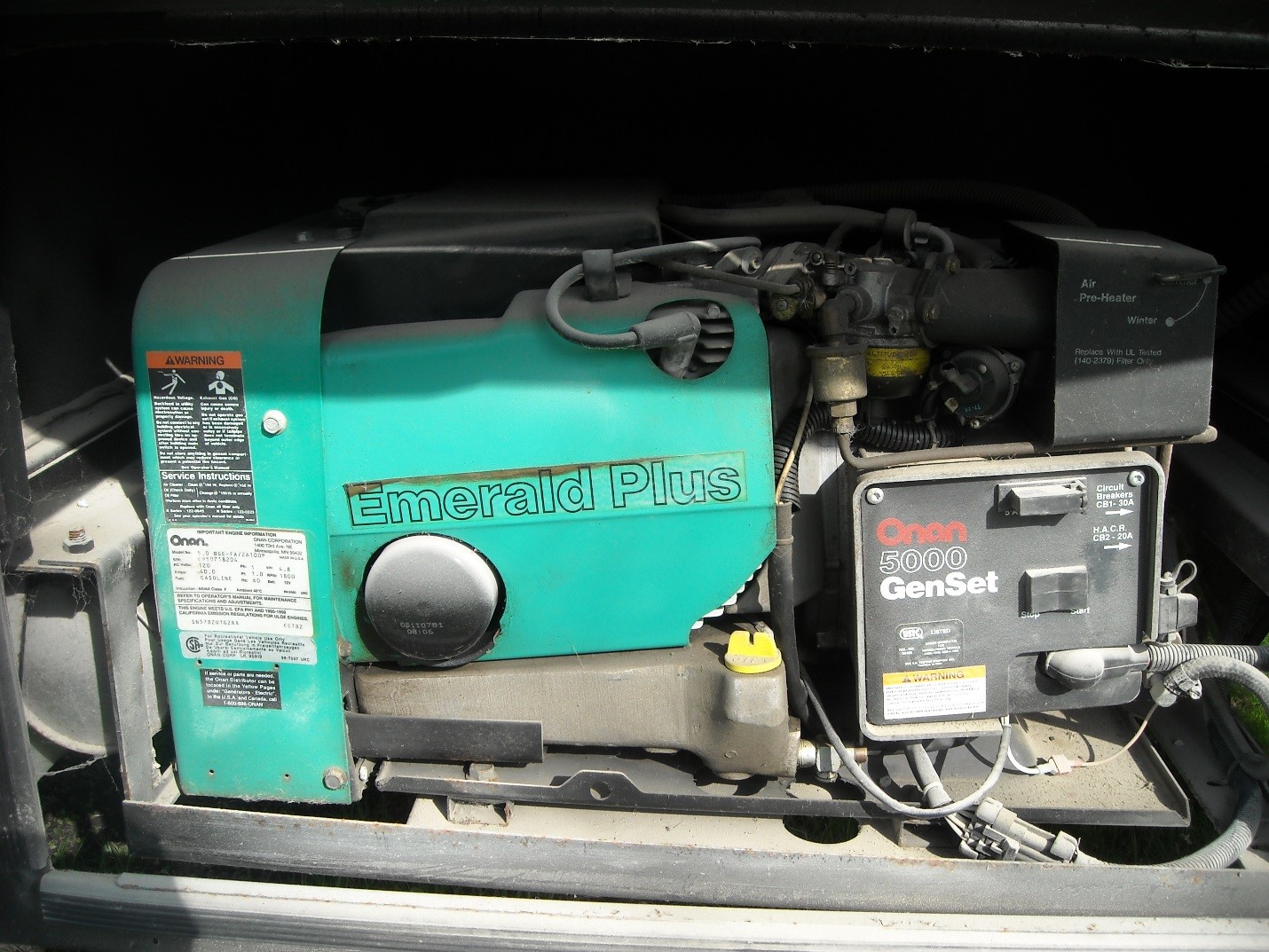 If you have an on-board generator, it should be “exercised” every month which consists of running the generator under a 20 amp or more load for at least 30 minutes. This lubricates the seals and reduces varnish build up in the gasoline versions. This is a maintenance task that few RV owners do, therefore there are several cases of generators not performing well or not starting at all due to varnish build up.

A cover is a great idea if your rig is stored outside as it helps reduce harmful UV rays, keeps the tires from weather checking, and keeps sealants from drying up. However, heavy winds and other environmental factors can wreak havoc with covers, and they should be inspected on a monthly basis to make sure they are not torn or coming off. A torn cover can flap in the wind and cause severe damage to the side or top of an RV as well as letting rain or snow to get under the tarp. 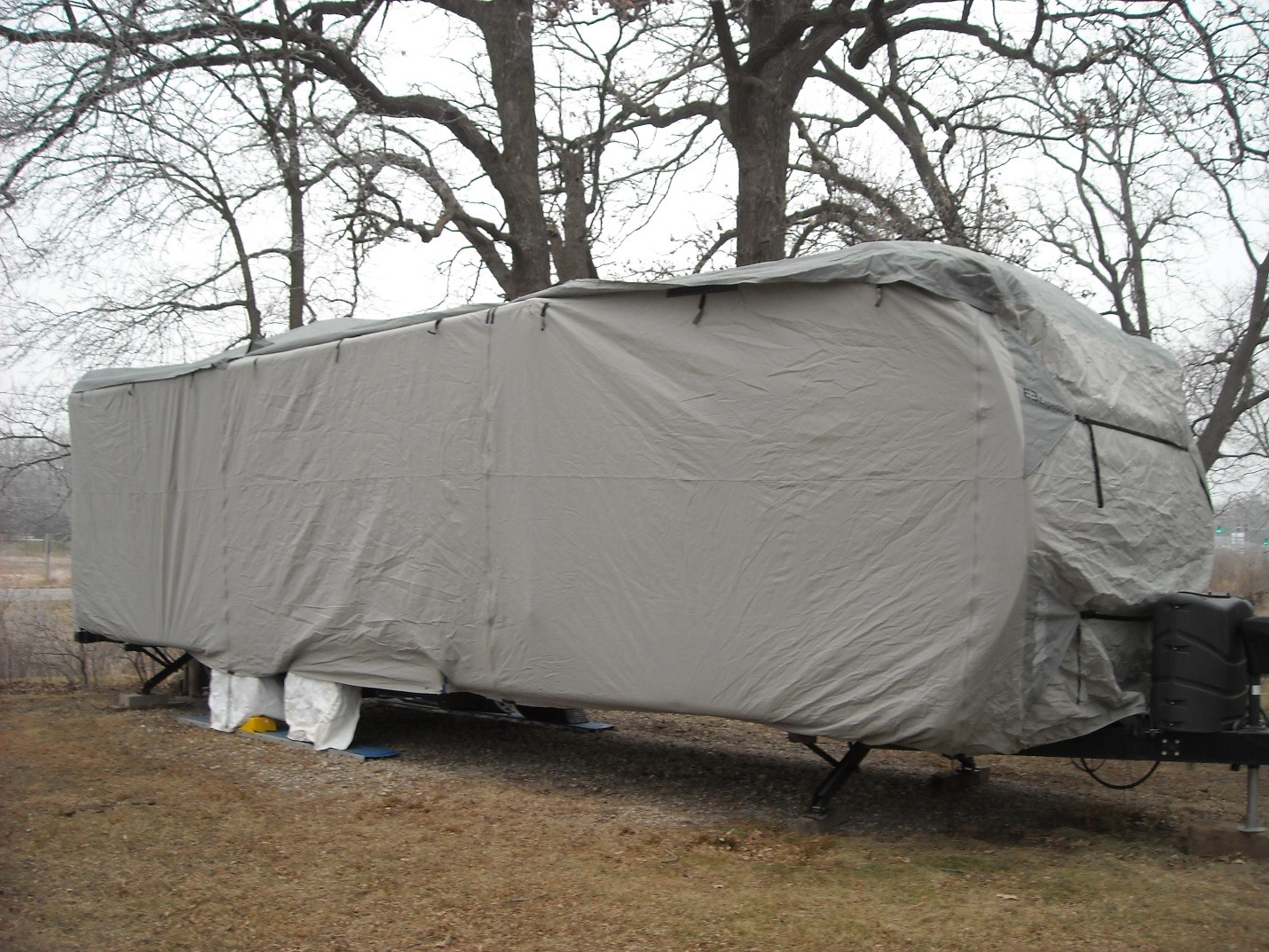 It’s also a good idea to visually inspect the unit for water leaks, rodents, odors or anything else that may be unusual to prevent it from getting worse. Last winter a local owner had a squirrel chew through the cover vent and made a nest inside the roof air conditioner. During the winter it completely chewed up the foam insulation inside the roof air, and in the spring he fired up the AC and it blew white foam “snow” all over the inside! Inspecting the rig for leaks and damage often may allow you to catch it early enough to fix or repair before it becomes major!

67 Responses to “RV Winter Storage: Out of Sight, Out of Mind?”