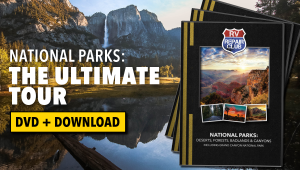 Enjoy the entirety of America’s National Parks, seen like never before.

With this special set, you can experience the splendor of untamed America. You’ll see 58 of America’s National Parks, shot in stunning high definition. Acclaimed filmmaker, Dennis Burkhart, showcases the unrivaled grandeur and vastness of America’s rare lands. From the deserts, forests and canyons, to the mountains, lakes and seashores – discover the true beauty of your America.

PLUS, you’ll receive this video set in both DVD and download form. This way, you can save the instruction on any device you wish, and watch it anytime, anywhere!

In a total of 6 hours of fun and beauty, you’ll get each of the 3 videos below:

This video tour of 20 National Parks starts with Grand Canyon National Park. Enjoy the solitude and grace of Joshua Tree’s desert, bask in the majesty of the Redwood forests, and see the profound colors of the Badlands. These 20 National Parks adorn America with ancient landscapes of magnificent natural wonders.

In 120 minutes, you’ll enjoy all these landmarks: